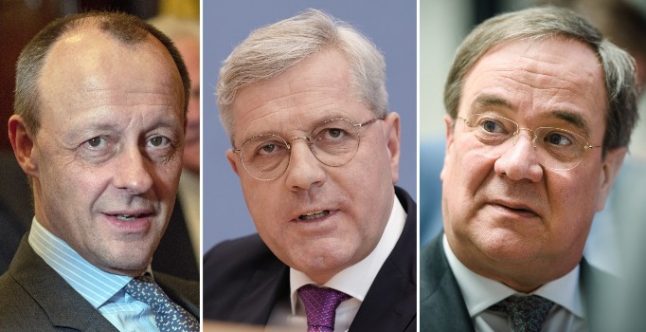 The chief of the Christian Democratic Union, who will be chosen at a party conference in December, traditionally leads it and its smaller Bavarian sister party the Christian Social Union to the polls.

MUST READ: Is Bavaria's leader on course to become Germany's next chancellor?

The race to become head of the CDU was thrown wide open earlier this year when Merkel's protegee Annegret Kramp-Karrenbauer resigned after just months in the job over her handling of a regional election scandal.

But a meeting originally planned for April to elect a new leader was postponed due to Covid-19.

Back then, the party that has dominated German politics for 70 years was facing plummeting ratings and a deep identity crisis over how to position itself against the resurging extreme right.

But since then, its fortunes have been reversed as the German public widely applaud Merkel's handling of the pandemic.

Yet ironically, the three pretenders for her throne have lost visibility in the media spotlight as Germany has grappled with the outbreak.

Instead, a fourth potential replacement for Merkel has emerged — not from the CDU itself, but from the CSU.

Bavarian state premier and CSU leader Markus Soeder has repeatedly stressed that his place is in Bavaria.

But his tough attitude on halting virus transmission has won him plaudits.

Seeking to close the gap

The latest opinion poll on who Germans would like to see as their next leader has Soeder topping the charts far ahead at 52 percent – more than 20 points ahead any of the three CDU contenders.

All three will be seeking to close the gap as the clock ticks down to the December vote.

Former favourite Laschet, 59, has taken a different approach to Soeder's hardline clampdown in Bavaria over the coronavirus pandemic.

Dubbed “laissez-faire Laschet” by the topselling Bild daily, he has fought against a controversial ban on hotel and stays for domestic travellers from areas with high infection rates.

But he has popular Health Minister Jens Spahn as his running mate, who has been lauded over his calm handling of the crisis.

Merz, a 64-year-old millionaire and old Merkel rival, was narrowly beaten to the party top job in December 2018 by Kramp-Karrenbauer and has been waiting in the wings ever since.

He is popular with the CDU's more conservative factions but has found little support for his ultra-liberal positions during the pandemic, which has led to unprecedented state intervention to prop up the economy.

Centrist Roettgen, 55, is a former environment minister dismissed by Merkel in 2012 who is now the head of the German parliament's foreign affairs committee.

Both Merz and Roettgen have struggled to get any attention during the health crisis.

With the race wide open, Merkel, 66, has been forced time and again to rule out running for a fifth term, telling journalists she will “really not” be putting herself forward again.

The CDU has meanwhile not ruled out nominating Soeder, rather than one of their own, to lead it into the election battle next year.