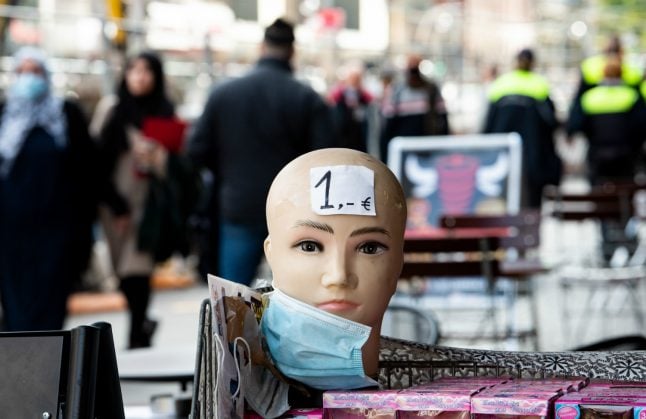 A market in Neukölln, Berlin, Germany's worst affected coronavirus district. Photo: DPA
How serious is the situation?
Germany has been reporting a rising number of daily cases.
When asked by Zeit Online whether the situation in Germany is as serious as it was in April, physicist Dirk Brockmann from the Robert Koch Institute (RKI) said “Yes, definitely… probably more serious.”
That's because the case numbers are rising rapidly. Since the beginning of October the number of cases has doubled. And the tricky thing about infectious diseases is that as the number of cases increase, exponential growth happens. The growth starts slowly and gets faster and faster, scientists say.
READ ALSO: Germany reports new coronavirus case record as fear of infections grows
Unlike summer, autumn is no longer about local hotspots caused by isolated outbreaks at workplaces or events, which were contained.
Currently there is a rise in cases in almost all German districts. As early as August, virologist Christian Drosten warned: “While the virus entered the population in the first wave, it will spread from the population in the second wave. Because in the meantime it has spread more and more evenly, across social classes and age cohorts.”
We can now observe this happening in Germany. Although the disease is the same, we are dealing with different dynamics in this resurgence.
What's happening in the health system?
There are real concerns about pressure piling on the health system, and contact tracing becoming too difficult. In Berlin, a major hotspot area right now, officials have already said they are struggling to keep up with contact tracing.
The number of coronavirus patients who are being treated in intensive care units in Germany has gone up significantly. On Thursday, 655 patients with the virus were handled in intensive care units, with 329 receiving oxygen.

The previous week (October 8th) the number stood at 487, and 239 received oxygen. There are currently around 8,700 free ICU beds in Germany, according to the official data.

The RKI has warned that the proportion of Covid-19 cases in the older age groups is “currently considerably increasing”, raising fears there will be more deaths in the coming weeks as this group is more likely to have a more severe reaction to the disease.
“The increase in active cases is a serious situation in Germany, particularly because we can see an increase in health care utilisation,” Tobias Kurth, professor of public health and epidemiology at the Charité in Berlin, told The Local.
“Looking at the neighbouring countries and their consequences should clearly warn us to act now.”
Chancellor Angela Merkel on Wednesday night said this was a “decisive time” for Germany.
“We can see that … infection rates are rising and that we have a very high infection rate in some regions,” Merkel said after the meeting held with state leaders on how to deal with the pandemic this autumn.

Measures are to be brought in across regions where numbers are rising in a bid to stop the spread and not overload the health system.
READ ALSO: What you need to know about Germany's new coronavirus measures for autumn
What should you do?
Merkel, other politicians and health experts have repeatedly said people in Germany must do their bit to help keep numbers down.
People in Germany have been asked to stick to distance rules, wash hands, wear masks properly when 1.5m distance can't be maintained from others, download the coronavirus app and air rooms regularly.
“Most importantly, do exactly all of that,” said Kurth. He added that people should try and reduce social contact “to a minimum and wear masks when possible – it will help the situation”. People walking in Dortmund, North Rhine-Westphalia. Photo: DPA
Should you work from home (if your employer and line of work allows it)?
There is no official communication from the German government on this issue. Some people have returned to their workplace over the summer but with conditions, such as wearing face masks in office buildings or people coming in on different days to avoid overcrowding.
Kurth said at the moment, with the increase in cases, his advice would be for people in Germany to work from home if they can. “I advise my team to do that, if possible,” he said.
READ ALSO: Will the pandemic spell the end of office life in Germany?
I have a birthday party at the weekend in my flat. Should I cancel it?
People in Germany are being asked to cut down on their social contacts at the moment.
“All citizens are once again asked to critically weigh up in each individual case whether, how and to what extent private celebrations are necessary and justifiable in view of the occurrence of infection,” said the government document drawn up after Wednesday's meeting.
So should you stop indoor private celebrations at the moment? It's up to you, but here's the advice of an expert: “I would advise people to reduce any get together with people that they do not see regularly,” said Kurth. “I think there is good enough communication that (private) parties are one of the drivers (of the spread).”
Is there anything else I should do?
You could consider getting a flu vaccination if you are part of a risk group. This week Health Minister Jens Spahn said Germany has ordered an extra six million doses of flu vaccine so as many people as possible can get a jab to reduce the risk of simultaneous influenza and Covid-19 outbreaks in a bid to protect the health care system.
Spahn said the country, which has a population of 83 million, will have 26 million doses available in total this year.

Vaccinations are voluntary in Germany, and for Covid-19 vaccines there are no plans to change that, Spahn said.

But he urged people who are considered high risk to get the flu jab to help avoid overloading the healthcare system during the pandemic.

“Getting a flu shot will also help,” said Kurth.
Maps and graphs: These are Germany's coronavirus hotspots
What might we see happen to the infection situation in the coming weeks?
“We will see a further increase (in infections),” said Kurth. “The next days are essential, and we all need to understand that the pandemic is driven by the behaviour of us all.
“If we do not stop the trend right now, health professionals will not be able to identify and trace, and consequences for the health care system will follow with a delay of 2-3 weeks.”
Brockmann of the RKI said he could imagine two scenarios after the next weeks. “On the one hand, the measures will take effect in a fortnight and the number of new infections will drop again,” he told Zeit Online. “Or that it will not be enough and then tougher measures will have to be applied again.”
Is another lockdown possible?
Everyone is keen to avoid another shutdown like we saw in March and April. The priorities for Germany are to keep schools and Kitas open, and protect vulnerable groups.
But a lockdown can't be ruled out. Markus Söder, state leader of Bavaria, said after Wednesday's meeting.

“We are actually much closer to the second lockdown than we want to admit,” he said after the meeting.”
“Unfortunately, that is possible although I very much hope that we do not need a full lockdown,” said Kurth. “The consequences will obviously be severe. We should all do what we can to help to avoid it.”