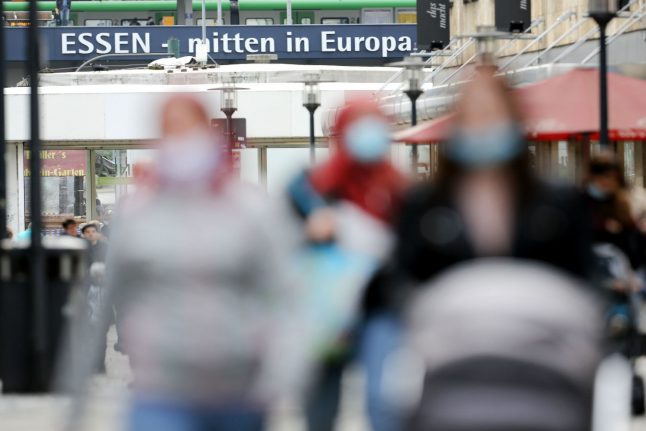 People walking through the centre of Essen with face masks on Tuesday. Photo: DPA

“This denunciation portal is definitely illegal and should be deleted immediately,” wrote Bundestag Vice President Wolfgang Kubicki of the liberal Free Democrats (FDP) on his Facebook page.

Green party digital expert Dieter Janecek was equally critical of the form. “Administrations should not use forms to encourage citizens to denounce other citizens. This divides society,” he told Bild.

The online reporting portal for infringements of coronavirus measures is available on the city’s website.

The place, date, time and type of violation, for example not wearing a mask or unauthorised events, should be reported, it states. Photos of the violation can also be uploaded. The personal details of the person breaking the rules, however, are voluntary.

The fact that citizens were now being turned into informers on official orders and were being asked to upload photos from public places “was a reminder of the worst times,” Kubicki said, referring to Germany’s era of Stasi surveillance which continues to haunt many Germans.

This pushed fear and mistrust into our society, he added. “The only thing missing is that the section officers are given a percentage of the fine,” he said, referring to a type of a community police officer in the GDR.

Janecek pointed out the irony that, while administrative tasks are normally very difficult to carry out in Germany, the online form was easily set up.

“It is very strange that, of all things, the notification of corona infringements was quickly made easier through this procedure,” he said.

The city of Essen itself, however, defended the form. It serves to “channel the information that the Ordnungsamt (public order office) normally receives by phone or email instead. At no time did we advertise the form or actively require people to report violations,” it tweeted.

According to public broadcaster RTL, the head of the public order department of the city of Essen, Christian Kromberg, said that Essen had no intention whatsoever of promoting denunciation.

“But if citizens feel the need to report a corresponding administrative offence to the city of Essen, they should do so in a structured and legally compliant manner,” he added.

Like several cities in North Rhine-Westphalia, Essen is particularly hard hit by the coronavirus crisis, with the city confirming 64 new infections in one day on Tuesday.