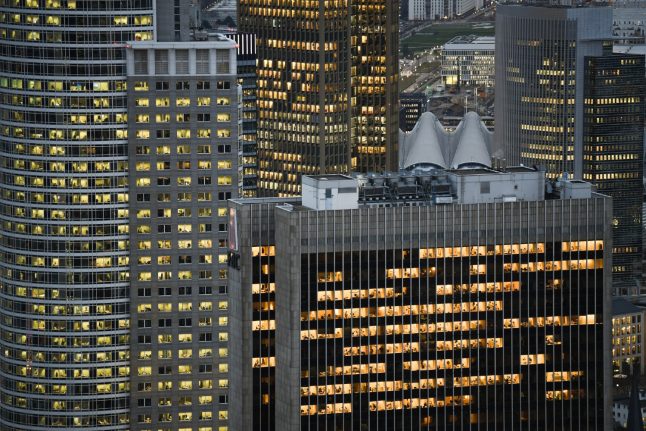 Will fully occupied office buildings like those in pictured in Hesse in 2018 be a thing of the past? Photo: DPA

Despite the rising number of people working from home due to the coronavirus pandemic, it seems that office buildings are still here to stay in Germany.

While companies have rented out significantly fewer new office spaces compared to before the pandemic, there’s no evidence to suggest that companies are cancelling their previously existing contracts.

Economists, estate agents and management consultants expect the coronavirus pandemic to have long term effects on working life, but what exactly these effects will be remains unclear.

Before the pandemic, far fewer Germans worked from home than other European countries. Since March, however, the amount of people doing so has more than tripled.

There are doubts, however, as to whether this dramatic increase will stay the same over the long term.

READ ALSO: Will working from home become the norm in Germany post coronavirus?

According to data from Savills, one of the world’s leading property agents, companies rented out significantly less office space than normal in the second and third quarter of this year.

“Large companies in particular are holding back from signing new rental contracts, the only exception being the public sector,” says Michael Pink, head of market monitoring at Savills' German subsidiary company.

But does this mean that companies no longer need any office space? Not at all. “Lots of companies would rather just extend their existing rental contracts at the moment”, said Pink.

“The amount of empty office space has increased for the first time since 2010, but only slightly. In fact, there are more occupied office spaces in the seven largest cities than there were at the beginning of the year.”

Landlords also have little to no desire to terminate rental contracts, even if tenants are experiencing financial difficulties, because given the circumstances it would be difficult to find new tenants to replace them. Working from home has become far more common in Germany since the outbreak of the coronavirus pandemic. Photo: DPA

“At the moment the most important thing for landlords and property owners is to remain stable and see the crisis through until we finally reach a ‘new normal’”, said financial market expert Philipp Wackerbeck from Strategy&, the consulting agency for the international auditing company PwC.

“As a landlord or property owner you’ll do anything to keep your existing property, even if that means going without full payments from tenants. Many real estate agencies have significant financial reserves, so they can deal with less income for a while.”

The death of the traditional office?

And what will the pandemic mean for companies in the long term? Some are saying that the office is an outdated workspace that is destined to die out.

“The topic is strongly debated, but the truth is that no one knows what will happen”, said economist Ralph Henger from the German Economic Institute in Cologne (IW).

Siemens, headquartered in Munich, is just one of the many large companies allowing some of their employees to work from home even after the pandemic is over. Their ultimate aim is to have their employees working from their home office two or three days a week.

Whether the company will need less office space in the future as a result remains to be seen, according to a spokesperson for the real estate company of the Munich-based Dax group.

Siemens isn’t the only company faced with these questions. “In the future many companies will most likely need less office space, because their employees are working from home more often”, said management consultant Wackerback.

“However, there may not be a direct correlation between the two, because even after the worst of the pandemic, employees will probably need to be spread across a larger space than before to comply with distancing regulations and other restrictions.”

Looking to the future

The long term effects of the pandemic have yet to be properly investigated.

“Office buildings are not all the same, their desirability also depends on the location”, added Wackerbeck.

“Property, whether it be offices or apartments, are more stable in value in popular locations compared to less desirable ones.”

The demand for offices has already started to pick up again in the past couple of months, says Henger, an economist from IW Cologne.

People’s attitude to home working will also play an important role. Long-held preconceived ideas that employees are less productive when working from home will not disappear overnight.

Some companies simply don’t want to be that flexible, Henger believes. “They prefer to have their employees come into the office.”

It remains to be seen how the demand for offices will change in the coming years, but Henger believes that “economic trends will play the most important role here.”

The pandemic will in all probability have a long-term effect on the way employers run their companies – but it is not yet possible to say exactly what that effect will be.

“Some things will definitely change, but the adjustment process will take many years,” says Savills expert Pink.

“The more important question is what the office of the future will look like and where exactly it will be.”