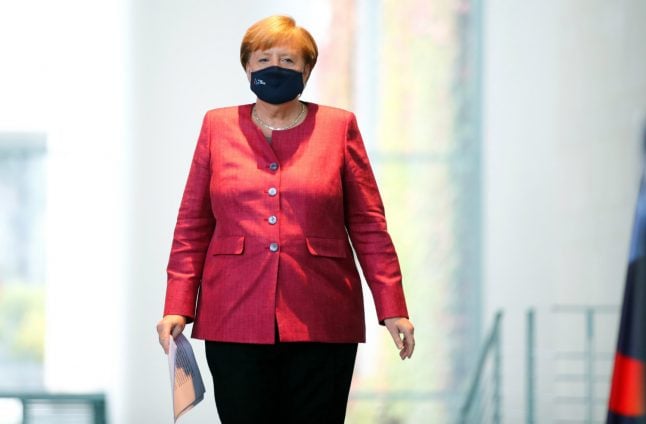 “We all sense that the big cities, the urban areas, are now the arena where we will see if we can keep the pandemic under control in Germany as we have  done for months, or if we lose control,” Merkel said after the talks.

“The coming days and weeks will decide how Germany gets through the pandemic this winter.”

READ ALSO: Coronavirus second wave: Why the party is over in Germany's cities

'Think about what is important to you'

She also asked the population to use the country's coronavirus warning app and regularly air out rooms as colder weather approaches and people spend more time indoors.

The veteran chancellor said she understood that measures such as earlier closing hours and curbs on alcohol sales would hit the struggling food and hospitality sector hard.

But she said her goal was to avoid the kind of harsh lockdowns that brought Europe's top economy to a standstill in the spring and kept millions of children home from school and daycare.

She also issued a direct appeal to young people, who have been seen as driving the current spike in infections, urging them to think of the health of elderly relatives and also of their own job and education prospects.

“Think about what is most important to you,” she said. “Isn't it the health of your family, your grandparents? Isn't it, also in the next few years, to have good training and work opportunities,” the chancellor asked the young population.

“It will all come back: partying, having fun,” she said. “But what matters now is something else.

“We have proven that we can stick together against all this. And we must continue to do so.”

Tougher measures to curb the spread

Capital Berlin and financial hub Frankfurt both joined a growing list of high-risk zones on Germany's map this week, after crossing the threshold of 50 new cases per 100,000 people over the past seven days.

Among the new measures that kick in once that level is reached are wider mask requirements, including outdoors in busy areas, as well as earlier closing hours for bars and restaurants and limits on alcohol sales and group sizes, Merkel and the mayors agreed.

Merkel said past experience had shown it takes “about 10 days” to see if such efforts succeed in slowing the outbreak.

If the infection rate does not stabilise in that time, “further targeted restrictions are unavoidable in order to further reduce public contacts”, according to the text agreed at the talks.

The goal is to keep the number of infections within a range where it is possible to trace the infection chains.

To help do that, it was also agreed that from an incidence rate of 35 new infections per 100,000 inhabitants in a week, the Robert Koch Institute (RKI) would send experts to crisis teams to help affected large cities. At the request of cities, the Bundeswehr (German army) will also be drafted in to advise and coordinate the support services required.

Germany, long seen as having managed the pandemic better than most European countries, is on heightened alert after the number of new daily cases spiked from 2,828 on Wednesday to just over 4,000 cases on Thursday – the highest daily figure since early April.

The country's RKI for disease control warned that the virus could “spread uncontrollably” if people let their guard down. On Friday, the RKI reported 4,516 new cases.