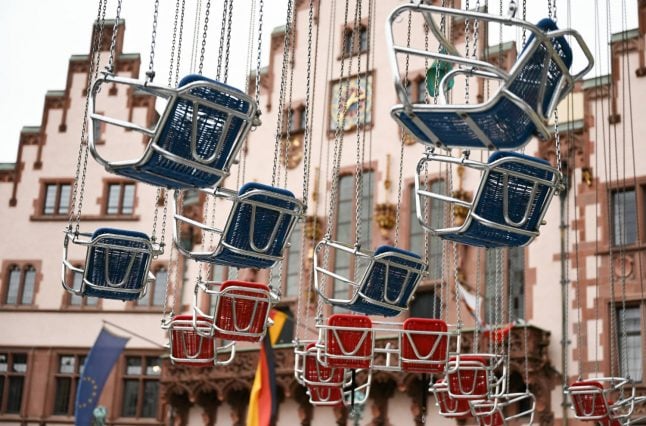 A fairground ride as part of Frankfurt's Autumn in the City celebration. It now faces being postponed. Photo: DPA

Like many other places in Germany, the number of coronavirus infections in Frankfurt is rising.

In the Hesse capital, the so-called incidence value, i.e. the number of new infections per 100,000 people over the past seven days, is approaching the threshold value of 50.

On Tuesday the incidence value was 46.5. About 300 people in the city are currently infected by the virus. Now the city has agreed on stricter measures.

The central state of Hesse has reported more than 20,100 coronavirus cases since the pandemic begin. There have been around 306,000 confirmed infections in Germany in total.

– Frankfurt has announced a 10pm curfew for restaurants, bistros, pubs and bars. However, the curfew does not affect freedom of movement on streets, mayor Peter Feldmann of the Social Democrats, added. It also doesn't affect cinemas or events such as exhibitions or book fairs.

– Gatherings are limited to a maximum of 25 people in public or rented spaces, while in private there is an urgent recommendation to limit the number of people to 10.

– There will also be a ban on alcohol consumption in public places and parks.  The ban is primarily intended to curb open-air parties.

– On Thursday the local government will set out exactly where compulsory masks will apply, as well as the locations of the alcohol ban.

When do the restrictions come into force?

All measures are to apply from Friday October 9th until next Sunday October 18th.

The city is also considering postponing the launch of “Autumn in the City” (Herbst in der Stadt), a move that would hit firms in the city hard.

From Thursday onwards, 40 stall holders are being given the opportunity to gather in public squares to attract customers as part of the event.

Organisers have been urged to look at their safety and hygiene concept again to see if a solution can be found, such as a more stringent concept.

Mayor Feldmann has called for an emergency meeting with 10 of Germany's largest cities on Friday to discuss how to coordinate measures and limit the spread of Covid-19.

“We are on the verge of the escalation stage red. The measures we have decided on today are sometimes severe.”

The aim of the measures is to prevent a general lockdown, he added.

“We are not making ourselves popular with this, but there is no other way,” said Feldmann. “The latest increase forces us to take measures that clearly intervene in the lives of citizens,” said Feldmann.