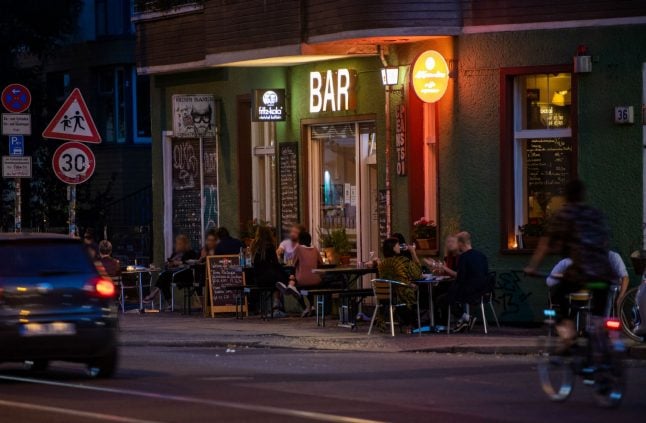 Bars need to close at midnight on Friday in Berlin, and after that there's an 11pm curfew. Photo: DPA

We updated this story on Friday October 10th.

The number of new infections per 100,000 inhabitants in the last seven days in Berlin has reached 52.8. When an area surpasses the 50 mark it becomes a 'risk zone'. This results in domestic travel restrictions for residents in the capital.  Peopel in Berlin are also not allowed to travel for overnight stays in the neighbouring state of Brandenburg.

There have been around 1,600 confirmed Covid-19 cases in the last seven days in the capital. And there were 498 cases reported in the last 24 hours on Friday, the highest daily amount in Berlin since the start of the pandemic.

In the inner city districts, the numbers are significantly higher than on the outskirts, with the Neukölln area in particular standing out with  an incidence rate of 133 – the worst number in all districts across Germany.

The coronavirus reproduction rate stands at 1.02, meaning each infected person is passing it to around one other person.

Berlin monitors the situation through a corona 'traffic light warning system'. When certain limits are passed, new measures are introduced.

On Friday October 9th Berlin mayor Michael Müller said he was not ruling out further measures to bring the situation under control.

Since the pandemic began, Berlin has registered around 17,100 cases. There have been around 314,600 confirmed infections in Germany in total, with around 4,500 within 24 hours reported on Friday

“This development causes me great concern,” said Müller. “It shows how important it is that we in the Senate have decided on further restrictions this week.”

Müller appealed to people to stop having wild parties outside as well as inside, to keep to distance rules and to restrict social contacts. “We are in a situation where we have to pay attention to each other again,” he said.

The sharp rise in infection numbers could result in new restrictions in the capital.

“Against this background, we can't rule out agreeing on further steps,” Müller said, adding: “We want to avoid a lockdown like the one we already had.”

READ ALSO: Coronavirus second wave: Why the party is over in Germany's cities

In a bid to slow down the spread of Covid-19, the Senate has introduced new regulations. They include:

– Private events and meetings indoors can have a maximum amount of 10 people. Previously the limit for indoor gatherings was 25.

– During the day, groups of up to 50 people will still be permitted to meet outdoors.

What about the curfew?

– Bars, restaurants and other establishments will have to close between the hours of 11pm and 6am.

– Sales outlets, including late night shops or Spätis, also have to close from 11pm to 6am.

– Petrol stations can remain open during this time but cannot sell alcohol.

– Pharmacies are allowed to stay open during this time.

When do the new measures apply?

The restrictions will come into force on Saturday October 10th (so just after midnight on Friday). They will last initially last until October 31st.

Should I know anything else?

The curfew is actually being challenged by a handful of bars and restaurants in Berlin who are arguing that there is no convincing justification for having to shut at 11pm.

A ruling is expected next week.

What's the aim of the new rules?

The measures are mainly aimed at clamping down on private parties and illegal parties, which the Berlin authorities see as drivers of the infection rate.

“We will bring the city to rest after 11pm,” said Justice Senator Dirk Behrendt of the Greens. Authorities do want to see crowds of people. So a “dispersal order” has been included in the rules, meaning police can break up groups of people gathering together.

Throughout the summer, there have been illegal parties in parks such as Hasenheide.

The curfew applies to all places where people can buy alcohol, Behrendt said. These closures are much easier to control than to check whether alcohol is being served.

What happens if you break the rules?

Fines of up to €5,000 can be slapped on establishments which break the rules. Punishments can also be handed out to people who break the contact restriction measures.

Senator for Culture Klaus Lederer of The Left party said particular hotspots, such as Friedrichshain, Tempelhof-Schöneberg, Mitte and Neukölln, would be checked more closely.

“We have the chance to repeat in a short time with these measures what we did in March, April,” said Lederer: “If we don't manage to do this, we will have to come down much harder.”

The health authorities are struggling to trace the chains of infection and action has to be taken, he said. A bar in Berlin on Tuesday night. From Saturday they'll have to shut at 11pm. Photo: DPA

“I am afraid this is on the verge of no longer being controllable,” said Bavarian state premier Markus Söder, of the centre-right Christian Social Union, in Munich on Tuesday, calling on those responsible in Berlin to fight more resolutely against the rising number of infections.

He pointed out that Munich had succeeded in slowing down the rise in infections by taking tougher measures.

Is there any more support for people?

The Senate also announced a multilingual information campaign to better inform citizens about the rules in force. Health authorities will also be allocated more staff to carry out their work.

Further financial support will also be given to the catering and late-night services. Clubs that remain closed will also get more liquidity support.

Meanwhile, the neighbouring state of Brandenburg has increased its corona measures in view of the rising number of infections, particularly in Berlin.

Starting Sunday, masks will be mandatory not only in public buses and trains and in retail outlets, but also in office buildings and lifts – but only if 35 new infections are detected per 100,000 inhabitants within seven days.

A mouth and nose covering is also a must in restaurants if you are not sitting at your seat. The new rules will initially apply until November 8th.

State premier Dietmer Woidke of the Social Democrats also asked residents not to travel to risk areas. State interior minister Michael Stübgen of the Christian Democrats said: “We are counting on the possibility that this containment will definitely prevent a second shutdown this year.”