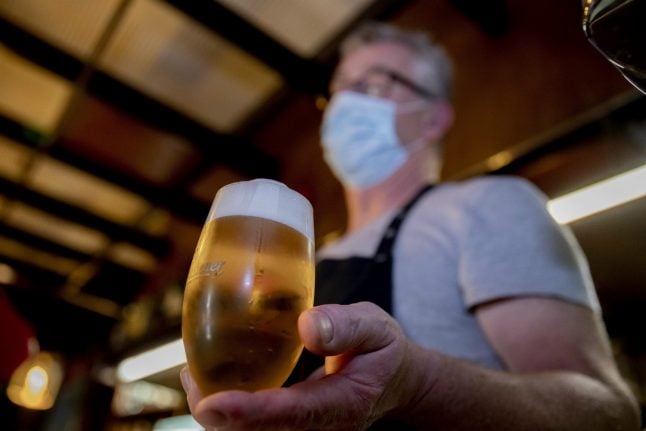 A bar worker with a beer at a Berlin Kneipe (pub). Photo: DPA

With bars packed, cigarette smoke and friendly embraces, a busy street in the Berlin district of Neukölln in the early hours of Sunday looked like the capital city most of us are familiar with.

Except for the odd member of bar staff wearing a face mask, it would be hard to tell that we’re in the middle of a pandemic, and gripped by a second wave.

Despite probably not breaking many rules (apart from the odd hug), it’s clear that people need to make a bigger effort to stop the spread of coronavirus.

Berlin’s health senator Dilek Kalayci summed up the situation on RBB radio on Wednesday when she said: “The time for socialising is over. The situation in Berlin is serious.”

She added that each individual has a responsibility to get the pandemic under control.

And there will be no choice but to face new rules: from Saturday bars, restaurants and most shops in Berlin will have to close from 11pm to 6am.

Outside at night only five people or people from two households are allowed to meet. Indoor private gatherings can have a maximum of 10 people. These rules are in force initially until the end of October.

Berlin is in the spotlight due to the speed in which infections are growing: with hundreds of new cases every day, daily infection figures are now above those logged in the capital in late March and early April.

To put it in perspective, in June and July the whole of Germany was seeing between roughly 200 to 500 cases a day.

But there’s a similar picture in other cities right now. That’s why Frankfurt has tightened coronavirus measures, turning to a 10pm hospitality curfew. A few weeks ago, Munich was in the grip of a rise in cases and banned alcohol in public places among other restrictions.

It can also be seen in the country-wide figures – on Wednesday health authorities reported 2,828 new cases within 24 hours, the highest daily figure since April. An outdoor beer garden in Munich in September. Photo: DPA

'They're going to shut bars soon'

On Saturday night, I went to a private event organised by a friend at a bar in Neukölln, officially dubbed a 'corona-hotspot'. In the last seven days, there have been more than 288 confirmed Covid-19 cases.

The incidence rate (new infections per 100,000 inhabitants within the last seven days) is 87.3. For the whole of Berlin that number is around 40.

There was a strict limit on the number of guests and instructions to write down our contact details, and wear masks when away from our seats.

On the whole it looked like people were sticking to the rules. Nobody, not least the organiser of the event, wanted to incur a steep fine.

But there was a feeling in the air like this was the last hurrah, like things were going to crash down at any moment. People wanted to make the most of being out and about.

“We won’t be allowed to do this soon,” said a friend, who had spent the last two days on a bender.

“They’re going to shut bars soon, I can feel it,” said another friend while ordering shots for the table. “We need to have fun.”

Throughout the pandemic I've rarely been inside bars. In spring and summer, everything moved outside.

Bars and restaurants were allocated more space to set up tables. Blackboards scrolled with offers for a €5 Aperol Spritz were placed outside. People only went indoors to use the toilet.

When I think of Berlin summer 2020 I recall people stoned and eating crisps, floating on rubber dinghies down the Landwehrkanal. With the city transformed into a different entity without its infamous nightlife, Berliners turned to the water.

There was also resilience: clubs adapted to become restaurants, art galleries or peep shows. Festivals and events continued with spaced out seating. Under capacity and not making as much money, but continuing nonetheless.

But in recent weeks there’s been a change in the weather. Although there is still a focus on being outdoors when possible, more people are flocking to the refuge of the inside of bars and restaurants.

Berlin bars are known in the winter for their Gemütlich (cosy) atmosphere, filled with candles and (unfortunately) cigarette smoke. None of this bodes well for us all as we try to dodge a virus that thrives in closed spaces and a lack of ventilation.

Authorities believe it’s these private parties and gatherings – particularly indoors – that are fuelling the spread of coronavirus.

This could well be true. On Tuesday, local paper B.Z. reported about a wedding with 350 guests where 48 people picked up coronavirus. Most guests live in the Neukölln area. The paper says there are four other weddings considered to be hotspots for spreading coronavirus.

The age group with the most infections in the last seven days in Berlin is 30-39 year-olds, followed by 25-29 year-olds.

“The increased incidence in the districts of Berlin (Friedrichshain-Kreuzberg, Mitte, Neukölln, Tempelhof-Schöneberg) is due to more diffuse transmission, including spread among young and international travellers and party guests, who contracted the infection during travel or at parties and subsequently infected household members and family,” said the Robert Koch Institute in it’s latest situation report.

Again, this is also affecting other places. In Hamm, North Rhine-Westphalia, a spike in infections is due to “about 200 cases in connection with a wedding”. Stricter distancing measures have been implemented there. Hamm in North Rhine-Westphalia is also a hotspot. Photo: DPA

Politicians in charge are trying to figure out how to dampen the spirits to avoid these spikes. From alcohol bans and mandatory masks in more places to curfews, it appears no city – whether it's Munich, Hamburg, Frankfurt or Berlin – is immune to the autumn second wave.

Can cities get it under control?

There is currently a debate over whether regional rules should remain or nationwide measures would help the situation.

The state of Schleswig-Hostein was under fire this week for effectively dividing Berlin up and dubbing the hotspots as risk zones. It means people from these districts would have to get tested and quarantine if visiting the coastal state.

Helge Braun, Chancellor Angela Merkel's chief of staff, has called for joint action from states and the federal government.

But when it comes down to it, everyone is looking at Germany's cities, and the residents living there, to get things under control.

In view of the rising infection figures, Braun said it was “now the task of these large cities to take effective measures quickly enough to break the chains of infection”.

Germany is, of course, keen to avoid a second lockdown. It looks like it's time to batten down the hatches to make sure we make it through the colder months without an uncontrollable rise in coronavirus cases. That will involve social sacrifices from us all.