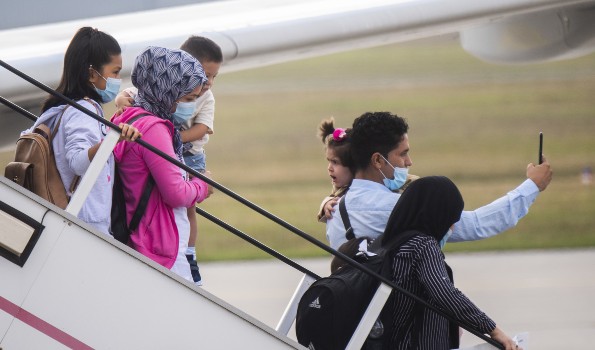 Numbers published by the German government show that in July of this year there were 1.77 million refugees living in Germany.

“We have got space, the numbers show that,” Ulla Jelpke of Die Linke told the Neu Osnabrücke Zeitung (NOZ). “And at the same time thousands of people who want asylum are waiting in terrible conditions at the outer periphery of the EU.”

Jelpke added that “as a rich country in the middle of Europe, Germany must not be allowed to shirk its responsibility by barricading itself behind barbed wire, hotspot camps and the tough policies of states with external EU borders.”

The government numbers show that roughly 1.31 million people with recognised refugee status currently live in Germany, a drop of 50,000 since the end of 2019.

A further 450,000 people live here while waiting for a decision on their status or have had their application rejected. This number is a drop of 15,000 on the end of last year.

A spokeswoman for the Interior Ministry told the NOZ that the decline was the result of the fact that many people have had their refugee status taken away from them. “A considerable number” of these people were no longer in Germany, she added.

In September Germany pledged to take in 1,500 refugees from the island of Lesbos, where a fire at the Moria refugee camp led to thousands of people becoming homeless.

READ ALSO: Should Germany step up support for refugees after Moira camp blaze?

Refugees from the island started arriving in Germany at the end of September.

The question of how many refugees from war zones Germany should take in has been hotly debated for years. The far left say that the government does not do nearly enough to support people, while the far-right advocated a highly restrictive policy.

Five years ago, Angela Merkel opened Germany’s borders to refugees from Syria, leading to over a million arrivals over the following 18 months.

READ ALSO: Five years on: How well did Germany manage the refugee crisis?