Explained: How to prevent a burglary at your home in Germany

While the number burglaries in Germany are currently low, it's still important to keep your property safe. Follow these tips to ensure your belongings remain secure.

Here's the good news: the number of people breaking into homes and stealing items in Germany has been going down  over the last few years.

Official statistics in 2018 by the Bundeskriminalamt (the Federal Criminal Police Office) showed a decrease of 16.3 percent in burglaries from homes compared to 2017.

Meanwhile, Business Data Platform Statista shows the number declined even further in 2019 (see our graph below). 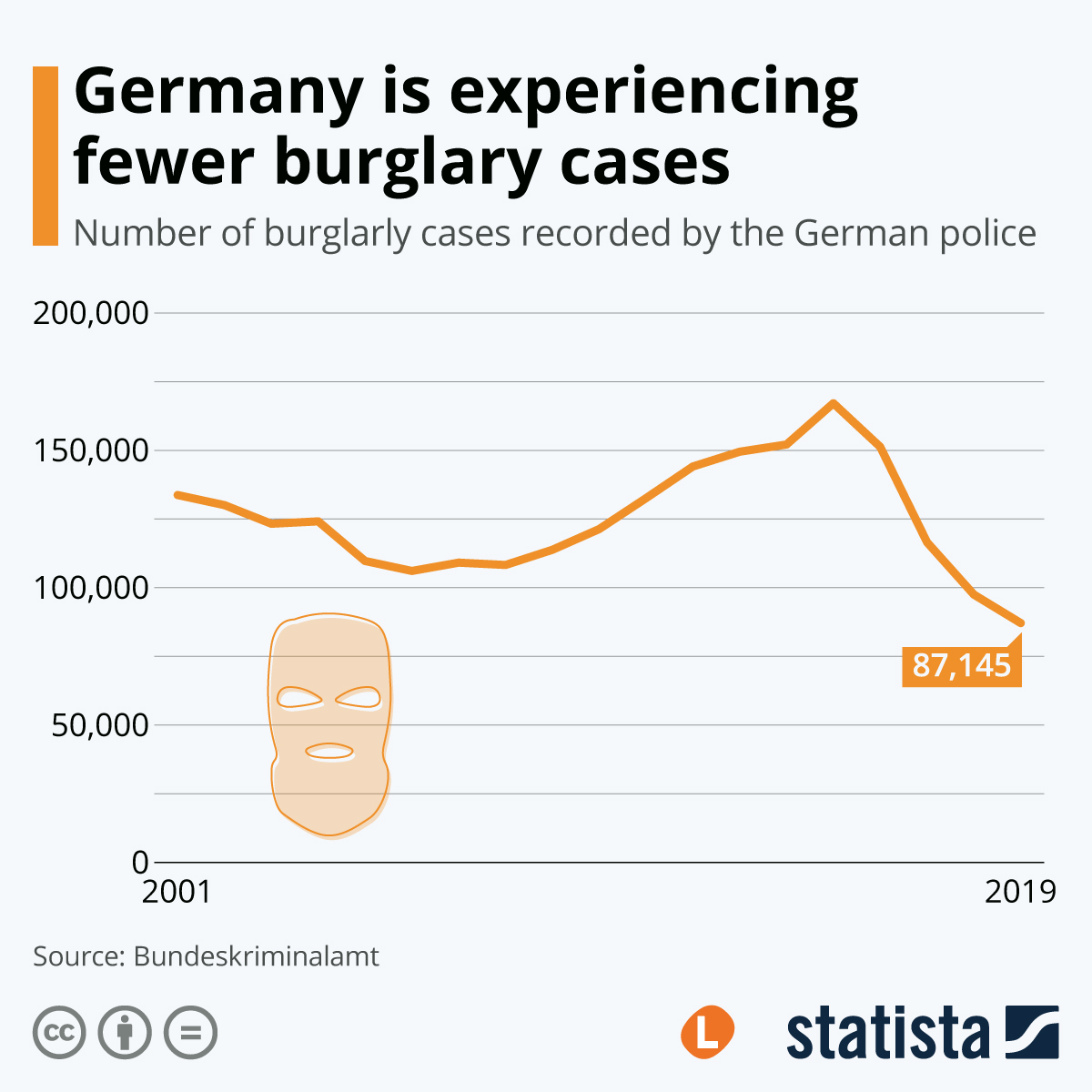 Burglaries in Germany have decreased in recent years. Photo: Statista

During the coronavirus crisis the number of burglaries in Germany also decreased in multiple states around Germany, with Managing Director of the German Insurance Association, Jorg Asmussen saying that "developments in the first half of the year indicate that we will see the lowest number of burglaries since our statistics began in 1981’’.

However, that doesn’t mean that it's not important to keep your home safe. With 87,145 burglaries taking place in Germany last year, it's still (unfortunately) a possiblity. You can follow this list of advice we've gathered from German insurance companies to make sure your home is low on the list of targets.

Always close and lock your doors and windows

Although it may sound obvious, it’s important to always lock your door – double lock preferably, and make sure all your windows are closed when you go out. A titled window still counts as an open window! This is particularly important for windows and doors on apartments on the ground and mezzanine floor. Some thieves come in over rooftops and other accessible areas however, so it’s always important to be careful.

Locking up properly is especially important as if a burglary occurs, insurance companies will regard an improperly unlocked apartment as gross negligence and potentially not compensate you for damage.

Don’t over announce your whereabouts on your social media

While you might be really looking forward to that trip abroad, it’s probably not the best idea to totally over announce that you’re going away on your social media platforms such as Instagram and Facebook, especially if your privacy settings are set to open. Announcing you’re leaving the country could basically be an invitation for someone to burgle your home.

Change the lock or add another

If you’ve moved in recently you may have considered that previous tenants or owners might still have keys to get in. Even if you know them, there’s no way of telling whether they’ve given a key to a friend or family member who might be able to enter your home. It might be worth installing a new double lock system to prevent this potential worry.

Make sure you don’t leave an extra set of keys lying in an obvious place. These include your letter box, flower pot, inside the electricity meter box and so on. Burglars will be quick to check these common hiding spots. If you want to leave an extra key in case of an accidental and emergency lock-out, the best place to do so would probably be with a trustworthy friend.

If you have some extra cash it can’t hurt to install an extra security system to make sure your apartment is properly protected. An additional alarm system can trigger an alarm or even report attempted burglaries to the police. Home assistants like Alexa have a feature that detects break ins based on noises built in which you can learn how to set up here.

If you have a balcony (which many households in Germany do) you can make it more secure by installing some fencing or large plants round it. Remember to lock the door to your balcony too! You might be refurbishing your home or have scaffolding installed outside your street. If there’s a situation that makes it easier to access the inside of your home, make sure you pay extra attention to stay secure in case someone climbs the scaffolding.

Burglars also sometimes get into communal garages that have timer doors, so make sure nobody creeps in before the door closes.

Make friends with your neighbours

Collaboration between community members can help catch burglars, so whether it’s making friends next door so you can ask them to keep an eye out when you’re not in the house, to setting up a neighbourhood watch WhatsApp group to alert each other if there have been any break-ins in your area recently, close collaboration between neighbours can be crucial to catches burglars.

What to do if your flat has been burgled?

Don’t panic. Go to a friends house and call the police. Make sure you describe the situation in detail and try not to enter the apartment until the police have given the all clear. It's crucial you photograph everything that the burglars have changed, taking note if the cupboards have been gone through, or footprints on the carpet.

Pay extra attention to photograph any damage caused by the break in and make a list of everything that has been stolen for the police.

If you do suffer a burglary in Germany, call the police on 110.