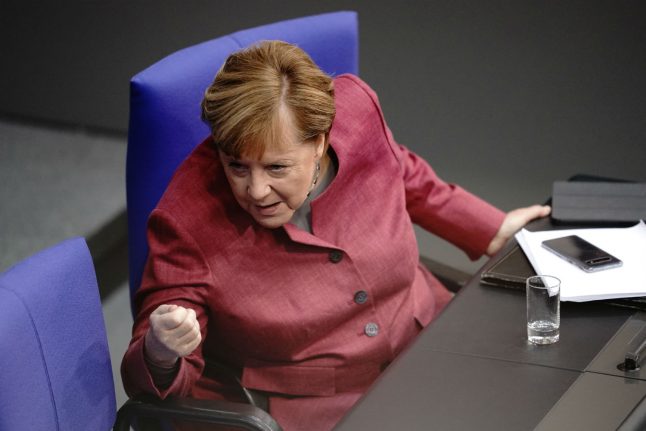 Merkel speaking at the Bundestag on Wednesday. Photo: DPA

“Let us all, as citizens of this society, take more care of each other again”, the Chancellor stated in the Bundestag on Wednesday.

She said that people’s cautiousness was starting to dwindle, and that “we are currently risking everything we have achieved in recent months,” warned the politician from the centre-right Christian Democrats (CDU).

The rising number of infections in Germany – which reached its highest level since April on Sunday – is a sign that the pandemic is far from over, said Merkel.

“I am sure life as we knew it will return. Families will celebrate again, clubs and theatres and football stadiums will be full again. What a joy it will be,” Merkel stressed.

“But now we have to show that we can continue to act patiently and rationally and thus save lives”.  She added that it was up to each and every person to do this.

‘Distance as an expression of care’

Merkel spoke at the Bundestag's general debate on the 2021 budget – probably her last as Chancellor.

The 66-year-old, who has held Germany’s top title for 15 years, stressed that she could not give a routine speech in view of the pandemic.

Everyone longed for closeness, contact and togetherness again, she said.. “I can feel that myself. I am no different from others.”

But one thing remains clear, said Merkel.  “We still need distance as an expression of care.”

The Chancellor also expressed serious concern about the recent spike in coronavirus numbers. She stressed that sticking to the rules now not only protects older people, but also the open and free society as a whole.

Germany could grow as a community through this historic challenge, she said.

However, Merkel was met with sharp criticism from opposition members of the parliament.

Free Democratic (FDP) leader Christian Lindner and Greens faction leader Anton Hofreiter warned that there was still no forward-looking testing strategy, such as rapid tests for people in care institutions and teaching professions.

Alternative for Germany (AfD) faction leader Alice Weidel, on the other hand, called on the government to: “Stop stirring up panic.” In her view, excessive measures had made the crisis the worst recession in Germany's history.

New measures of autumn and winter

Merkel reminded her audience of a difficult autumn and winter, stating that stricter measures adopted by the federal and state governments would be necessary.

In future, for example, guests face a fine of €50 give false information in restaurant lists. These lists are intended to make it easier to trace contact in cases of infection.

There are also upper limits for private parties, depending on the number of infections: if there are more than 35 confirmed infections for 10,000 people within seven days, a maximum of 50 people should be allowed to celebrate.

For parties in private rooms, a maximum number of 25 people is “strongly recommended.” If the number of infections continues to rise, only 25 or 10 people are allowed to celebrate.

Critics doubt, however, that the rules can be controlled and enforced.