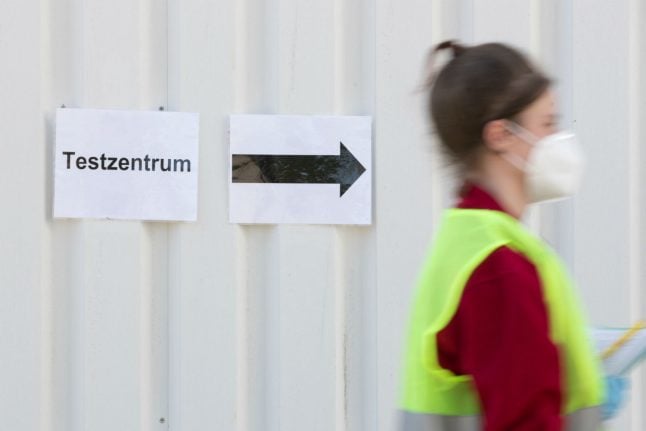 A testing centre in Bielefeld in August. Photo: DPA

Due to the large number of pupils in attendance, a total of 10 schools in the area were affected, according to a statement issued by the city.

However, it is not known the total number of people at the party a week ago, which local media dubbed as a “super spreader” event.

By Monday, the number of people who needed to go into self-isolation grew to 900 – accounting for the students at the party and their teachers – as the number of confirmed cases rose to 36.

The number of people who tested positive could increase even further as more tests are underway Monday afternoon, said local authorities.

Following the outbreak, the district council advocated a uniform upper limit of 50 people at private celebrations including weddings and birthday parties.

Currently private celebrations in NRW are allowed to take place with up to 150 people. Masks are not required to be worn, as long as it’s possible to trace those in attendance, according to the local rules.

But from October 1st, private parties in NRW with 50 or more participants must be registered with the local public order office (Ordnungsamt) at least two weeks in advance.

North Rhine-Westphalia saw 1,865 coronavirus cases in the last seven days, making it the third most affected state behind Baden-Württemberg and Bavaria.

Since the beginning of the coronavirus crisis in February, the state has confirmed 68,720 coronavirus cases, 59,178 of which are reported to have recovered.

Coronavirus infection rates around Germany have recently reached levels not seen since April, leading Chancellor Angela Merkel of the centre-right Christian Democrats to make a call on Monday for tougher enforcement of rules to stem the spread of the virus.

READ ALSO: Merkel warns coronavirus cases in Germany 'could leap up by 19,200 daily by Christmas'

The German Association of Towns and Municipalities has furthermore called for mask wearing to be made mandatory at busy squares and Christmas markets in the event of high infection rates.

In view of the approaching flu season, health expert Karl Lauterbach of the centre-left Social Democrats (SPD) has called for free flu vaccinations for everyone with statutory health insurance.