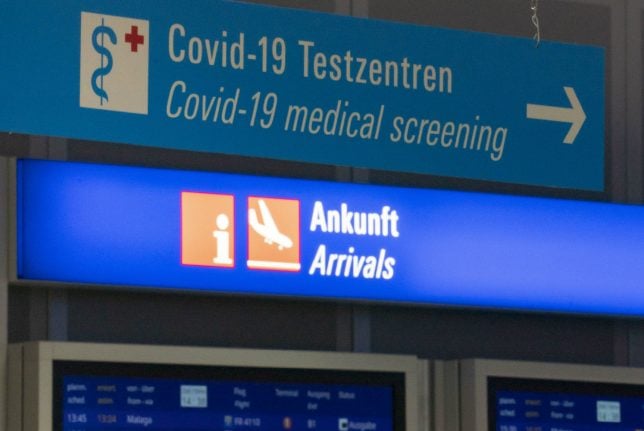 People returning from risk countries have to be tested. Photo: DPA

The German government on Thursday declared regions in 11 EU countries to be coronavirus risk areas, warning residents against travelling there.

These include areas directly bordering Germany in the Czech Republic and Austria, as well as the capitals of Denmark, Portugal and Ireland – Copenhagen, Lisbon and Dublin.

In total, regions in 14 out of 27 EU Member States have now been designated as risk areas. The Federal Foreign Office has updated the travel warnings on its homepage.

Test 48 hours before or after entry

Travellers returning to Germany from risk areas must be tested for coronavirus 48 hours before or after entry and then remain in quarantine until the results are available.

Note that the travel warning is not a ban, but is intended to have a significant deterrent effect. At the same time, it offers an advantage to consumers: travellers can often cancel bookings free of charge.

Parts of Denmark, Portugal, Ireland and Slovenia have been designated as risk areas due to the rapid increase in Covid-19 cases. Areas in France, the Czech Republic, the Netherlands, Croatia, Romania, Austria and Hungary are also on the list.

The tourism industry in Vienna said it expects huge losses due to it being classified as a risk area in Germany.

In Austria, as well as Vienna, the holiday region of Vorarlberg with the capital Bregenz south-east of Lake Constance has now also been added to the list.

In the Czech Republic there are three administrative regions on the border with Bavaria and Saxony which are now affected: Karlovy Vary (Karlovy Vary), Pilsen (Plzen), Liberec (Reichenberg) and South Bohemia.

Czech Foreign Minister Tomas Petricek said that Germany's decision was “understandable” given the rising coronavirus cases in the country.

The governments in both countries are currently negotiating exceptions for commuters and lorry drivers, he said. “We continue to negotiate on so-called local border traffic, i.e. possible exceptions for people living directly at the border,” said the Social Democrat.

It is estimated that around 37,000 Czech commuters work in Germany, mainly in the catering and health sectors. In Bavaria, the so-called “Einreisequarantäneverordnung” (entry quarantine regulation) provides that commuters from abroad do not have to go into quarantine if they regularly stay abroad for no longer than 48 hours and show no symptoms.

READ ALSO: What you need to know about Germany's quarantine rules for arrivals

Coronavirus spreads particularly strongly in urban areas. In Denmark, the region of Hovedstaden, which includes the capital Copenhagen, is now designated as a risk area. This also includes the popular holiday island of Bornholm in the Baltic Sea. In Ireland and Portugal, the capitals Lisbon and Dublin are also classed as risk areas.

In France, various regions have been designated as risk zones in recent weeks. Now there are three more, which, although not on the German border, are well-known and popular among holidaymakers: Normandy, Brittany and the Loire Valley.

Of Germany's eight neighbouring countries, only two are still without a risk area: Luxembourg and Poland.

Following the outbreak of the pandemic, the Federal Foreign Office issued the first worldwide travel warning for tourist travel on March 17th. For more than 30 European countries it was initially lifted again in mid-June. After only a few weeks, however, travel warnings in some countries were reactivated due to rising infection figures.

More than half of EU countries are now affected. However, Spain remains the only EU member state that has been fully declared a risk area.

Classification usually takes place when the number of new coronavirus infections exceeds 50 cases per 100,000 people within seven days. However, there may also be other reasons for a travel warning, such as a lack of hygiene measures.

Most countries outside of the EU, including the US and India, are considered risk areas. The government is set to lift its blanket warning against worldwide tourist travel from October 1st but the Foreign Office said it will still warn against visiting many countries with high infection rates.

READ ALSO: How will international travel from Germany look from October?

A list of the regions considered risk areas can also be found on the Robert Koch Institute website, which is updated regularly.