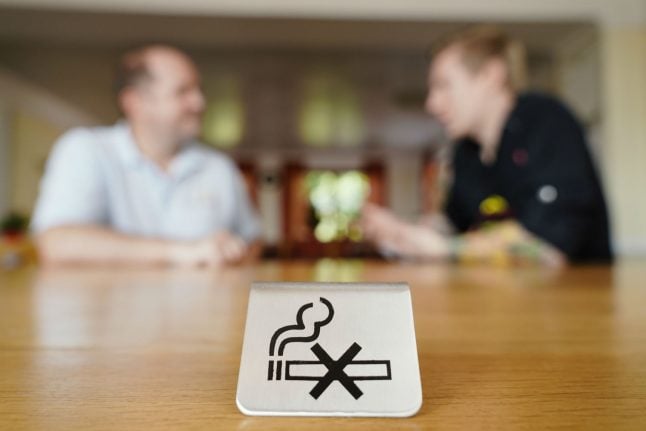 Glas (r) and head chef Grüning sit at a table in the restaurant designated for non-smokers. Photo: DPA

“I give employees who don’t smoke five days more annual leave to compensate them for the extra cigarette breaks taken by smokers,” said Helmut Glas.

Some may see this as patronising, but in his eyes it helps keep the peace at work.

“Before you could sense some hostility toward the employees who smoke. You’d hear non-smokers mutter things like ‘oh, he’s off for another cigarette break’,” said the 44-year-old restaurateur.

“And they have a point: if you tally up the extra breaks that smokers take, you won’t believe how much working time is lost.” Now, he says, peace has been restored.

Glas, who runs the country inn Jägerstübchen in the town of Neustadt, remembers exactly when he came up with the idea to offer non-smokers more holidays.

“I announced the decision at the Christmas party. It received quite the reception,” explained Glas. He had sounded out the idea beforehand and was therefore largely greeted with approval.

“When I told my employees one of the smokers said ‘great, now I won’t have to deal with rude comments every time I take a cigarette break’’”. Five of his employees smoke and seven don’t – and he doesn’t smoke either.

One of his employees tried to quit smoking to receive more annual leave, but Glas caught him in the basement with a cigarette. The employee may not have kept the extra holiday, but at least he kept his job, said Glas. Glas in his restaurant. Photo: DPA

His head chef Steffan Grüning, on the other hand, is trying to persevere: he has given up after smoking for 15 years.

“The prospect of getting more annual leave was the key motivating factor”, explained the chef. Before a pack of cigarettes would barely last him two days. “The initiative is definitely improving the atmosphere at work,” said the 32-year-old.

But is he not annoyed that he’s received five more days of annual leave this year, only to be stuck at home due to the coronavirus pandemic? “I don’t mind,” says Grüning with a smile, “the main thing is that I have more time off.”

For labour law specialist Nathalie Oberthür, offering additional leave for non-smokers is generally permissible from a legal perspective. “The employees who smoke have more free time because they take more breaks, and so offering extra leave can compensate non-smokers,” she says.

But the decision to grant extra leave should not be taken on the grounds of whether someone smokes or not, rather whether they take additional breaks to smoke.

“Anyone who only uses their official breaks to smoke should also receive the extra holiday leave,” said Oberthür. If the distinction were being made solely to punish smokers, that would be unlawful.

The German Hotel and Restaurant Association (Dehoga) also see the policy as justifiable. “If the employees agree with the decision, then it can be seen as good conflict resolution in the workplace”, said Gereon Haumann, regional boss for Dehoga Rhineland-Palatinate. He agrees that working time is definitely lost through smoking breaks.

“Employees that don’t keep popping out for breaks are simply more productive”, says Glas. “Before you know it that’s ten minutes gone.”

German employees are not legally entitled to extra smoking breaks. Courts in Germany have made it clear many times that the need for an occasional cigarette is not considered a legitimate reason to interrupt work.

According to a Hamburg University study published in 2009 by the German Cancer Research Center, smoking breaks cost German companies more than €28 billion a year.

“I am pleased that the idea has gone down so well amongst my employees. They could have kicked up a real fuss about it,” said Glas.

“As we are a small company it’s possible to maintain such a policy here.” A larger business like the chemicals company BASF would definitely find it more difficult to implement.

Glas was saddened when he received anonymous hate for his decision on the Internet. “I was accused of discriminating against smokers and told that I’m a nutcase who deserves to be sued” “he said.

That meant he was all the more pleased when he received a letter from his health insurance provider.

“They find the idea interesting and want to know more about it –  also as a means of preventative health care,” he said, implying that employees could be inclined not to smoke due to what it would cost them.