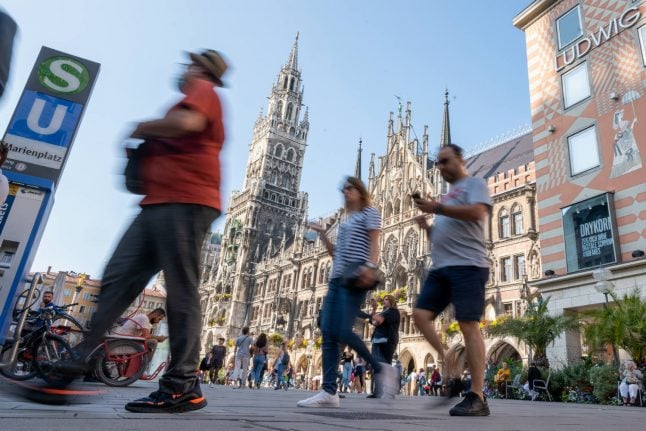 People walking in Marienplatz in Munich. From Thursday visitors to this area will have to wear a face mask. Photo: DPA

And fresh figures highlight how more young people are picking up the virus.

Half of new cases in Bavaria are under 35s

In Bavaria, which is tightening its coronavirus restrictions this week in a bid to slow down the spread, every second new case is someone aged 15 to 34-years-old.

Figures from the State Office for Health and Food Safety (LGL) show 47 percent of all reported infections in the last seven days come from this age group.

“At this age there is often contact with a large number of people – and the risk of infection is underestimated in one case or another,” said state health minister Melanie Huml of the centre-right Christian Social Union (CSU) in Munich on Tuesday.

According to the LGL, 29 percent of all reported infections in the past seven days are accounted for by the group of young adults aged 20 to 30 years-old alone.

“The increase in corona infections in Bavaria can still be attributed in part to the many summer travel returnees from risk areas,” said Huml.

“But careless behaviour that increases the risk of transmitting SARS-CoV-2 can also be a reason.”

As The Local has been reporting, authorities in Munich are worried about replacement parties held to celebrate Oktoberfest, which was cancelled earlier this year.

Huml asked for caution and consideration. She urged people to think about their own protection and that of others, and to adhere to distance rules.

Bavaria has reported around 65,000 coronavirus cases since the pandemic began.

There are also worries about rising rates in Berlin. The Berlin Senate introduced a traffic light warning system in a bid to keep checks on the coronavirus epidemic in the capital.

Currently two of the three warning lights representing the reproduction (R0) number and the amount of new infections have moved from green to amber. The other indicator included in the traffic light system, which is still green, is the occupancy rate of intensive care beds.

The R number in Berlin is 1.52 at the moment, meaning one person with coronavirus goes on to infect around 1.5 others.

With a 7-day incidence of 21 new infections per 100,000 inhabitants, cases are rising fast.

In the popular central Friedrichshain-Kreuzberg district the number – 51 – is significantly higher. It's above the threshold of 50 new cases per 100,000 people in seven days. Coronavirus measures in Germany have to be tightened when this threshold is crossed.

The Senate is now discussing further measures with the particularly affected districts of Mitte, Neukölln and Friedrichshain-Kreuzberg. Berlin will also discuss tightening the obligation to wear masks in public places like in Munich.

There have been around 13,100 cases in Berlin since the start of the outbreak.

In some cities across Germany's most populous state of North Rhine-Westphalia (NRW), including Cologne, Hamm, Remscheid, Gelsenkirchen and the Oberbergischer district there are also rising cases. That means residents there could face restrictions on public life soon.

In NRW there's been around 65,200 confirmed cases since the outbreak began.

According to the Robert Koch Institute (RKI), at least 274,158 people in Germany are confirmed to have picked up the Sars-CoV-2 virus since the beginning of the pandemic, and 9,396 people have died.

On Saturday, 2,297 new Covid-19 infections were recorded in Germany, the highest figure since April. “After a temporary stabilisation of case numbers at an increased level, a further increase in transmissions in the population in Germany can currently be observed,” wrote the RKI in its situation report on Monday.

According to RKI estimates on Monday, the reproduction rate, or R-value for short, was 1.06 in Germany (previous day: 1.22). This means that someone with coronavirus goes on to infect on average slightly more than one other person.

The R-value reflects the course of infection about one and a half weeks before. Experts aim to keep it under 1 but it is subject to fluctuation.