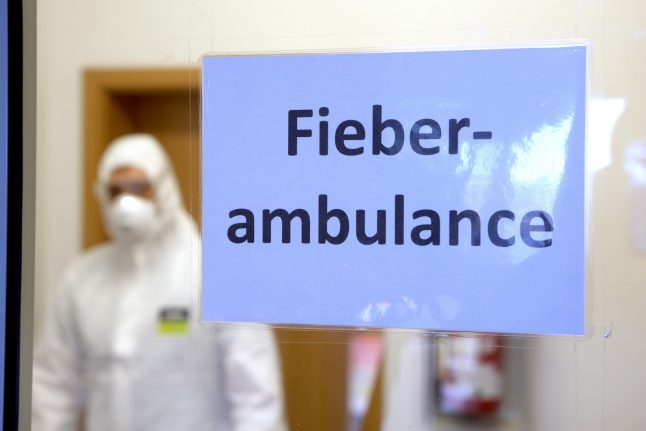 Spahn said Germany could better cope with the pandemic by introducing nationwide so-called 'Fieberambulanzen' or 'fever outpatient clinics' – special contact points for patients with respiratory symptoms that could be coronavirus or flu.

He also said there should be increased protective measures and testing for risk groups.

The aim is to arm the country with more tools to stall the spread of coronavirus during the autumn and winter seasons.

For patients with common respiratory symptoms such as a fever or cough indicating a coronavirus or flu infection, there should be central contact points, Spahn told the Rheinische Post.

He said he was counting on the Association of Statutory Health Insurance Physicians (KBV) to offer these clinics locally. “Conceptually they already exist – ideally they should be accessible nationwide in autumn,” he said.

The aim is that people with symptoms “can get “tested to find out what kind of illness they have and where one will be particularly protected so that they don't infect others”.

These clinics have already been set up in some parts of Germany, including the central-eastern state of Saxony-Anhalt. People there have to call their local health department and they can be referred to the outpatient clinic to be tested if it's suspected that they have coronavirus. They can then be tested and advised on further measures.

According to Spahn, there should also be more special measures to minimise dangers for risk groups such as the elderly or the immunocompromised.

“It is important that we continue to provide special protection for particularly affected risk groups and that we sharpen the concepts for this in everyday life,” said the politician who's a member of Angela Merkel's centre Christian Democratic Union (CDU). “That is why preventive screening tests in sensitive areas such as nursing homes will become a fixed component of the test strategy for autumn and winter. We must prevent the virus from entering these homes. The highest level of vigilance is still required.”

Spahn expects that by mid-October, in coordination with Germany's 16 federal states, it will be clear how the general testing strategy for autumn and winter will be developed.

Rapid antigen tests, which can tell in minutes rather than days whether someone is infected, are planned, as well as new guidelines from the Interior Ministry on the quarantine period for returnees from risk areas abroad.

READ ALSO: These are the countries and regions on Germany's high risk list

Spahn further explained that test capacity has been increased enormously. “In the last four weeks alone, about a third of all tests since the beginning of the pandemic have been performed,” he said.

The Robert Koch Institute (RKI) on Monday said there were 922 new infections in Germany within 24 hours, increasing the total confirmed cases since the pandemic began to 272,337. A total of 9,386 people have died so far.

Note that the number of new cases are often lower at the weekend and the start of the week due to data being transferred at a slower pace by local health authorities to the RKI.

Meanwhile, Spahn praised the decision to hold the Bundesliga opening game in Munich without spectators and did not rule out similar steps in future.

“As bitter as this may be for the individual and the mood in football, if infection rates rise regionally, no fans should go to the stadium. The city of Munich did exactly the right thing,” he said.

Due to rising coronavirus infection figures in Munich, no fans were admitted to the Bayern Münich v FC Schalke 04 (8:0) match on Friday evening, contrary to the original plan. Initially 7,500 fans were to be allowed in the stadium.

Authorities decided the risk was too high on Thursday evening.