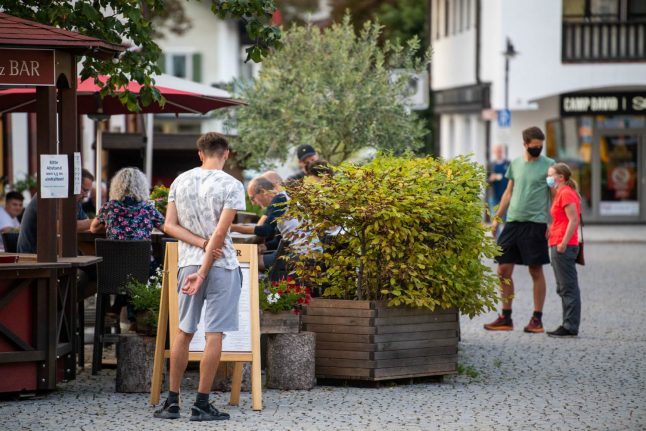 The town of Garmisch-Partenkirchen which has reported an outbreak. Photo: DPA

The Robert Koch Institute (RKI) reported on Thursday September 17th, 2,194 new coronavirus infections within 24 hours. Cases last reached this level in mid-August but had dipped below 2,000 in recent weeks.

In March and April around 6,000 daily cases were being reported.

Since the start of the pandemic around 265,857 people have contracted coronavirus in Germany, according to the RKI.

The R number, which is used to measure how many people with coronavirus go on to infect others, currently stands at 1.

Experts say it's important to keep this number under 1, although localised outbreaks can lead to it fluctuating. It means one person with coronavirus goes on to infect under one other person.

Where are the new infections?

According to the RKI's report from Wednesday, 24 districts in Germany have reported an increased incidence of more than 25 cases in 7 days per 100,000 people.

But most new cases are in the southern state of Bavaria.

Districts affected include Garmisch-Partenkirchen and the urban district of Würzburg, in Bavaria, where the incidence rate is above 50 cases per 100,000 people in both cases.

In Würzburg, the increased cases have been attributed to a Covid-19 cluster stemming from an outbreak in a shisha bar and further cases in private or work environments.

Authorities in Bavaria believe that an outbreak in the ski-resort town of Garmisch-Partenkirchen was compounded by one so-called superspreader, a 26-year-old American woman who visited several pubs in the town of just over 27,000 people and infected several people in the process.

The woman visited several locations despite symptoms and an ordered quarantine, reported the RKI.

READ ALSO: Why is Bavaria so concerned about impact of American super spreader?

Kulmbach in Bavaria also exceeded the limit on Thursday with 52.9 new infections per100,000 inhabitants.

There are also increasing number of cases in the state of Baden-Württemberg and North Rhine-Westphalia.

The below table provides an overview of the number of cases in states. This was taken from the RKI's latest available report published on Wednesday. What does it all mean?

Scientists say that in the last few weeks more younger people have become infected in Germany.

“The current decline in the proportion of deaths among the reported cases is mainly explained by the relatively high proportion of younger people among the newly diagnosed cases, of which relatively few fall seriously ill and die,” said the RKI.

However, they pointed out that it's important to prevent a renewed increase in infections among the elderly and vulnerable groups in the population “as was the case at the beginning of the pandemic”.

“Since last week there has been a slight increase in the number of cases in the higher age groups; this trend should be observed carefully,” said the RKI in its report.

Experts urged people in Germany to follow the coronavirus restrictions put in place to stall the spread.

These including observing rules of distance and hygiene, also outdoors, by ventilating indoor spaces and, where necessary, by wearing a mouth-nose cover correctly.

“Crowds of people – especially indoors – should be avoided if possible and celebrations should be limited to the closest circle of family and friends,” said the RKI.

The RKI also said the number of cases stemming from people returning from abroad into Germany is going down.

However, there's an increase in Covid-19-related outbreaks being reported in nursing homes; hospitals, facilities for asylum seekers and refugees, community facilities, various work settings and in connection with religious events.

According to Johns Hopkins University, the number of infected people worldwide has risen to over 29.76 million. Most cases were reported in the USA (over 6.6 million), followed by India (over 5 million) and Brazil (over 4.4 million). At least 939,456 people worldwide have died as a result of Covid-19.

IN NUMBERS: What we know about the coronavirus situation in Germany in June 2020