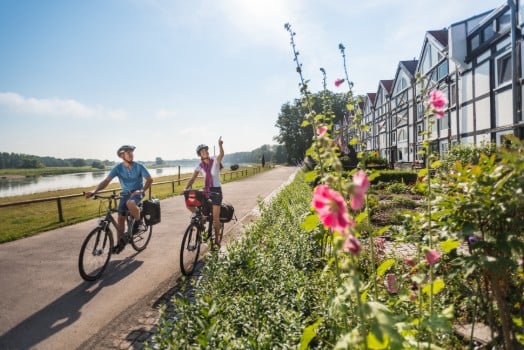 This being Germany, the classification of a Fernradweg is a very detailed thing.

Firstly, and logically, it has to be long. The German Cycling Club specifies that a route has to be at least 150 kilometres in length to qualify as a Fernradweg.

They also have to be well sign-posted, not have too much vehicular traffic. but at the same time well enough maintained so that one can cycle the whole route.

Other specifications are that they are two metres wide at all points and that there are plenty of opportunities to find a hostel or camping spot.

All told, there are an estimated 40,000 kilometres of long distance bike paths in Germany. So you're not likely to have to repeat a route any time soon if you don’t want to. This route (also known as the Altmühlweg) winds along the Altmühl river in Bavaria and stops off at Rothenburg ob der Tauber, one of the best preserved medieval towns in Germany.

A particular highlight of this 250-kilometre tour is the stretch through the narrow lower Altmühl valley. It cuts through the hills of Franconian Jura, whose steep slopes feature several weird rock formations.

Opened in 1979, the Altmühlweg is one of the oldest and most popular Fernradwege in Germany.

If you like mountains and you love lakes, then this is the tour for you.

Stretching between Germany’s largest lake, the Bodensee, and unquestionably its most beautiful, the Königssee, this route guarantees scenery galore.

Starting in Lindau, the path crosses the Allgäu before running along the edge of the Alps. Along the 430 kilometre route you’ll pass by the Chiemsee with its famous palace before heading towards Königssee, nestled underneath the monstrous Watzmann mountain.

First opened in 1992, the Fehnroute is a circular, 173 kilometre cycle path in the state of Lower Saxony.

It is marked out by the fact that there are very few features in the landscape at all, making it ideal for those seeking a gentle ride.

But fear not, there are impressive sites along the way. This route crosses several canals, where you will get to cross small wooden drawbridges. You’ll also see windmills, red brick churches and wild moors. The Ostseeküsten Radweg stretches along the coastline of the Baltic Sea between the cities of Flensburg and Lübeck in the state of Schleswig-Holstein.

One of the most popular routes in the country, it promises spectacular sea views throughout the trip. And when you need a bit of sustenance, there are shacks selling Fishbrötchen dotted along the route.

In the summer you'll have ample chance to stop off at beaches, such as the sands of Travermünde, for a cooling swim.

This cycle path through the Mosel wine region – famed for its Rieslings – is broken down into ten stages, giving cyclists plenty of time for a detour into one of the idyllic wine villages along the route.

It follows the river Mosel river from a starting point in Perl to the finishing line in Koblenz. Be prepared for picturesque Fachwerk houses, castles atop wooded hillocks, and more wine than it is probably sensible to drink on a bike tour.

Taking you through Münsterland and the Tecklenburger Land near the Dutch border, the 100 palace route offers 960 kilometres of cycling and well over a century of castles, palaces, manor houses, farmsteads and other monuments.

This circular tour inside the borders of Brandenburg boasts of being the longest of all the Fernradwege in Germany.

As you can imagine, given the length of the tour, it takes you through just about every town that is worth seeing in the forested state.

From Templin in the beautiful Uckermark down to Cottbus in the coal mining region of the south, after completing this route you'll know Brandenburg like the back of your hand. Ever fancied travelling the entire length of one of the longest rivers in Germany? With the Elbe Cycle route you can do exactly that along the 1,200 kilometre Elbe.

The route actually starts in the Giant Mountains in the Czech Republic, before winding down through the Elbsandsteingebirge. It then takes you through four German states (including a cycle through Hamburg) before arriving at the mouth of the Elbe in Cuxhaven.

Along the way you’ll pass through four UNESCO world heritage sites including a relatively new member of that veritable list – the Speicherstadt in Hamburg.

It has been voted Germany’s best Fernradweg an incredible 13 times by the members of the German Cycling Club. Not to be missed. A rebuilt Roman gateway at the Limes. Photo: DPA

This one is for the history buffs. The Limes is the ancient Roman wall built between the rivers Rhine and Danube to keep the Germanic tribes out of their empire.

The 818 kilometre bike path follows the fortification along a stretch of the UNESCO World Heritage Site, which is also the longest ancient monument in Europe. There is plenty of history to dig your teeth into, including ruins and rebuilt fortresses.

The route passes through four states and several nature reserves. It is also quite hilly, thus demanding a good level of fitness.

Another one for those interested in history, albeit that of a more modern variety than the Limes: the Berlin Wall tour does what it says on the tin. It takes you along the route of the Wall, a surprisingly long 160 kilometres.

Along the way you can stop at information points to learn about daring escape attempts and the life of GDR border guards.