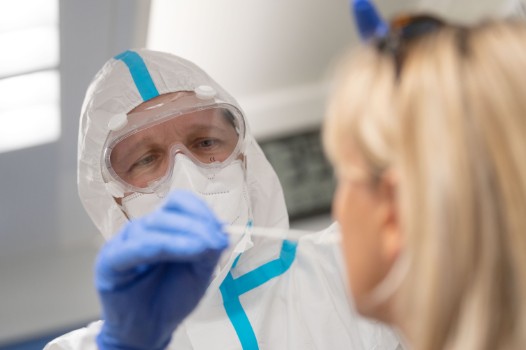 The report also confirmed six extra deaths, bringing the total up to 9,368 people who have died with the disease since the pandemic began.

Some 270,000 people have tested positive for the disease since the start of the year, with slightly over 230,000 of those having recovered.

The R-number, the value which indicates the average number of people an infected person passes the virus onto, came down slightly on Tuesday evening. It now lies at 1.04 having been 1.18 on the previous day.

Several vaccines expected at once

The Vaccination Commission (Stiko) at the Robert Koch Institute has said that it believes that several different vaccines will be granted approval in Germany.

“In view of the large number of potential Sars-CoV-2 vaccine candidates, it is likely that in the end several vaccines will be approved,” said the vice-chairwoman of the commission, Sabine Wicker.

It could be that one vaccine is more suited to certain population groups – such as older people – than others.

Berlin expects that a vaccine against coronavirus in Germany will be available for parts of the population in the first months of next year. But a vaccine will only become broadly available in the middle of the year.

Health Minister Jens Spahn (CDU) said on Tuesday people with pre-existing conditions, older people and employees in the healthcare system and in nursing care will be given priority.

According to the World Health Organization, work is being carried out on developing an effective vaccine in around 170 projects worldwide.