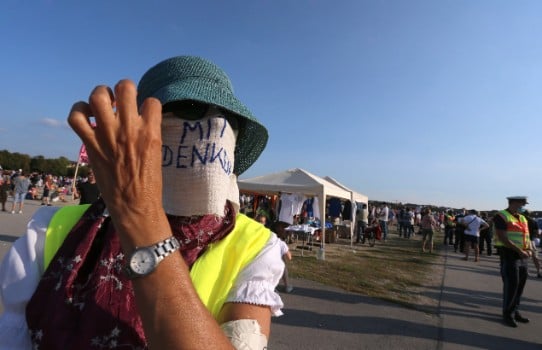 A woman demonstrates against corona restrictions in Munich. Photo: DPA

Some 8,000 people marched in the southern German city of Munich, according to a police estimate, most of them ignoring a city ordinance requiring the wearing of masks.

At least a thousand turned out in Hanover, central Germany and there was another demonstration in the western city of Wiesbaden.

Tens of thousands turned out for similar demonstrations last month in Berlin.

The movement is made up of a number of different groups, from self-declared “free thinkers” to anti-vaccine campaigners, conspiracy theorists and far-right activists.

Although clashes marred the last protest in Berlin late in August there have been no reports of trouble so far on Saturday.

German Chancellor Angela Merkel said in a statement on Saturday that she understood why some people had a problem with the restrictions being imposed.

She acknowledged that people were free to criticise government policy in peaceful protests.

And in what appeared to be a response to some protesters' claims of being censured, she pointed out that many people envied Germany for the freedom accorded people to publicly disagree and demonstrate.

In the Polish capital Warsaw meanwhile, several hundred people joined a similar protest that marched through the city centre.

Some protesters carried placards denouncing what they say are the “lies” told about the pandemic.

Others placards denounced the Microsoft billionaire turned philanthropist Bill Gates — the target of conspiracy theories about the virus — opposed any new lockdown, or called for the resignation of the government.