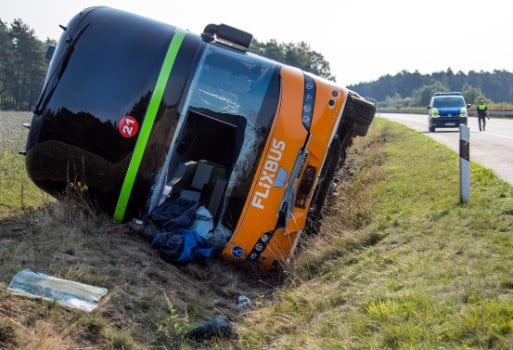 The incident took place on Autobahn 24 near Wöbbelin in Mecklenburg-Western Pomerania, the bus veered off the lane early on Saturday morning, tipped over and stopped in a ditch.

The bus, run by the company Flixbus, had some 30 passengers on board when it crashed. It was travelling between Prague and Hamburg.

Initially the Rostock police department reported that 31 people were injured. They later corrected the number of seriously injured from 3 to down to one.

Everyone on the bus was taken to hospital as a precaution. All but one of these passengers had been released from the hospital by the afternoon, a police spokesman said.

A rescue helicopter landed at the scene of the accident, but did not have to take any injured persons with it.

“We can confirm that the driving and rest periods were observed”, said Flixbus spokesman Sebastian Meyer.

A police spokesman said  on Sunday they believe that the driver might have fallen into a microsleep. “The investigation is ongoing,” he said. According to the police spokesman, the weather conditions at the time of the accident were normal.

The incident led to serious delays, with the autobahn being fully closed between the Wöbbelin and Hagenow junctions in the direction of Hamburg until well into the afternoon.

Bus accidents often cause a stir, but are relatively rare.

In May 2019 a long-distance bus near Leipzig was involved in an accident in which a woman died and nine people, including the bus driver, were seriously injured. Investigations revealed that the driver had lost control of his vehicle due to a “medical problem”.

In June 2019, seven people were injured when a Flixbus hit a truck on the autobahn near Karlsruhe, after the truck suddenly changed lanes. Just under a year earlier, 22 people were injured near Rostock. Their bus veered off the road and overturned in a ditch.

Despite such accidents, long-distance buses are among the safest means of transport.

“The risk of having an accident with a coach is significantly lower than when you are driving your own car,” states the German automobile Club (ADAC).

According to the German Federal Statistical Office, buses are involved in just under one percent of all traffic accidents involving personal injury.