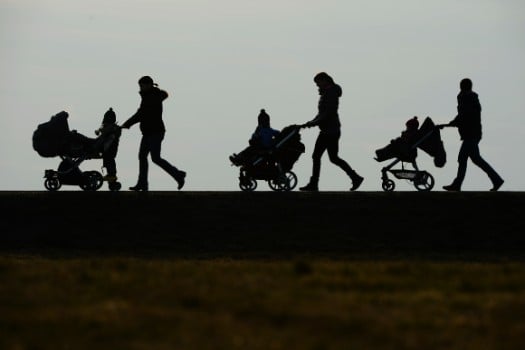 “There can no longer be any talk of a decline in the family as a way of life in the corona times,” Opaschowski told the DPA.

There are signs of a reversal of the trend, he claims.

According to representative surveys, the proportion of respondents who longed for “marriage with a marriage certificate and children” has fallen year on year since 2013, from 75 percent to 63 percent at the beginning of 2019. But and in March 2020, contrary to expectations, it rose slightly to 64 percent.

According to Opaschowski, 18 million people in Germany live in one-person households, whether they want to or not. In 1991, there were only twelve million. In times of crisis, singles feel left alone in their own four walls.

The so-called social distancing in public reinforces this feeling. Family life, on the other hand, offers not only a wealth of relationships, but also mutual support.

In the crisis year 2020, the majority of Germans favour marriage over a civil partnership. 69 percent of women and 65 percent of the men surveyed expressed this preference. Among West Germans, 68 percent were more in favour of marriage compared to 61 percent of East Germans.

The strongest support for the “Bund fürs Leben” was found among the generation of 40 to 64-year-olds, with 72 percent being in favour.

A marriage certificate is no longer perceived as a straitjacket, Opaschowski concludes. A rethinking is taking place.

According to the Federal Statistical Office, some 416,000 marriages were entered into in Germany last year.

That was significantly less than in 2018, when the highest figure since 1999 was reached at around 449,000. The legalisation of marriage for same-sex couples in October 2017 also contributed to the high number.

But in 2019, both the number of marriages between men and women and same-sex couples declined, as the Federal Office reported in July. The statistics do not yet give any indication of the possible effects of the corona restrictions this year. However, experts expect a veritable wave of separations.

“During the peak phase of Corona there was a radical strain on relationships due to the forced closeness,” Berlin psychotherapist Wolfgang Krüger recently explained.

Opaschowski does not see this as a contradiction to the change in values he noted: “Separated people long for a new relationship.”