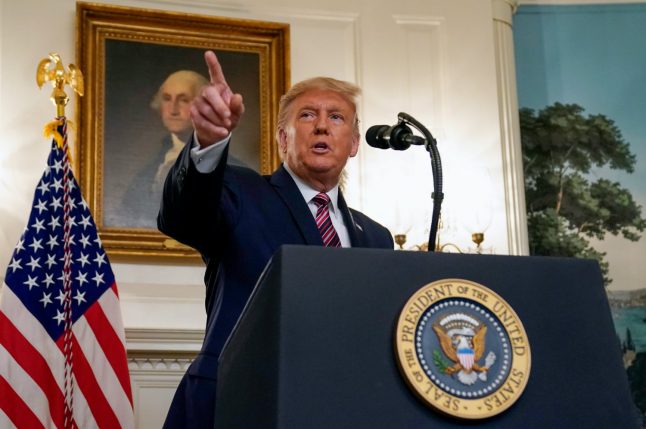 Germans are more worried about Donald Trump than getting infected by coronavirus, according to a study. Photo: DPA

The annual survey, conducted by insurance firm R+V, has been asking Germans about their greatest fears since 1992.

It acts as a useful barometer to monitor fluctuations in fears surrounding a range of topics, ranging from politics and health to the economy and the environment.

Despite the outbreak of a worldwide pandemic, the 2020 ‘fear index’ (ie. the average level of German worries) stood at just 37 points, the lowest level since the survey began almost 30 years ago.

In 2016, on the other hand, growing concerns about the migrant crisis, political extremism and terrorism caused the index to rocket to 52 points, the highest value seen in the past decade.

This year, US President Donald Trump took the top spot for the second time since 2018. A total of 53 percent of those surveyed believed his policies make the world a more dangerous place.

The impact of Trump’s hostile foreign, trade and security policies on international relations are among the biggest concerns shared by Germans. The survey did not question respondents about other heads of state, however.

READ ALSO: What are Germans most worried about in the coronavirus crisis?

The economic impact of the coronavirus crisis was also a widely held fear, with over half of those surveyed (51 percent) saying they were worried about rising food prices.

Almost one in two respondents (49 percent) expected to see tax increases caused by the EU debt crisis and Germany’s shrinking economy. Only a quarter fear losing their jobs, however.

“If the coronavirus crisis causes more bankruptcies and layoffs in the near future, we will most likely see fear levels increase significantly in the coming year,” said survey leader Brigitte Römstedt.

Levels of concern about health problems caused by the pandemic, on the other hand, were considerably lower. Only 32 percent of those surveyed feared falling seriously ill with coronavirus, ranking as low as 17th out of the 20 fears included in the survey.

“We know from experience that the fear index is particularly high when people feel helpless or when they are confronted with seemingly unsolvable issues,” said Römstedt.

“At the moment, many people feel that they can protect themselves from coronavirus by sticking to hygiene regulations and that the government has the situation under control. This has obviously prevented panic from spreading.”

Manfred Schmidt, political scientist at Heidelberg University, has been analysing the results of the survey for almost 20 years. He expressed his surprise at how much domestic political issues have lost importance this year.

Survey respondents have not had this much faith in German politics since before the turn of the millennium. Only 40 percent said they felt that politicians were overwhelmed by their responsibilities – a new record low for the Federal Republic. Schmidt attributes this to the government’s effective management of the coronavirus crisis.

Concerns surrounding the environment have stayed the same, however. A total of 44 percent of those surveyed feared that Germany would be increasingly affected by extreme weather and natural disasters. The sudden loss of concern about political issues meant that environmental worries climbed from number thirteen to number five on the list this year.

At the same time, concerns surrounding migration have dropped by more than 10 percent, reaching the lowest level since the height of the migrant crisis in 2015.

Worries about tensions caused by an influx of migrants and the state becoming overburdened ranked at 6th and 7th place respectively. 37 percent are still fearful of political extremism and 35 percent expressed concerns about terrorism.

In 2016 and 2017 it appeared that the difference in fear levels between eastern and western Germany may have finally disappeared, but since then the gap has grown again – especially with regards to immigration.

In eastern Germany, almost two thirds of those questioned believe that the influx of refugees is overwhelming the country, whilst in western Germany the figure lies at 39 percent. In addition, 56 percent of those in the east fear conflicts caused by further immigration, while this fear is only held by 40 percent in the west.

Gender also revealed itself to be a significant factor. The survey results typically show women to be more fearful and critical than men. They see Donald Trump as a bigger danger, are more concerned about rising food costs and are more likely to be scared of falling ill.

Only one thing caused the same amount of concern for men and women: despite lockdown and working from home forcing couples to spend more time together, just one in ten Germans are worried that their relationship will fall apart as a result of the crisis. This ranked bottom on the list of fears given to those surveyed.

This year, the survey was conducted in June and July with 2,400 people over the age of 14. Respondents were given a list of predetermined topics and asked to rate their fear levels on a scale from one (no fear at all) to seven (a great deal of fear).

Many of the topics included in the survey remain the same each year, with new questions added and removed to account for current global issues.