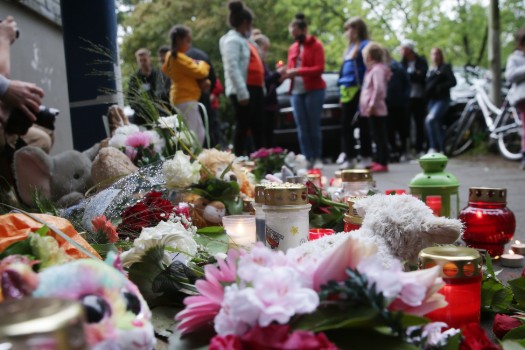 Flowers in front of the family home in Solingen. Photo: DPA

However, these are often not taken up because women are afraid of having their children taken away from them, says Stephan Hiller from the Federal Association of Catholic Institutions and Services for Educational Assistance (BVkE).

Hiller was speaking on the occasion of the case of five children who are believed to have been killed by their mother in Solingen. What the familial situation was like in Solingen was initially unclear.

There are also many families who do not want to show the outside world that they have a problem, explained family counselor Michael Möller. In the case in Solingen, the context of the family relationships played a role.

This raises the question of whether the mother had had further support. According to the police, the mother and her last partner, who was also the father of four of the killed children, had separated a year previously.

The crime had probably been committed in a state of emotional overload.

If something is wrong at home, it is often noticed by carers and teachers in kindergarten or school. “Then of course the youth welfare office is called in,” explains Stephan Hiller. They then work with independent welfare agencies, which have specific offers for such families.

A very high-threshold offer are for instance mother-child houses, says Hiller. High-threshold, because it is stationary, i.e. mothers move with their children into certain housing groups.

But there are also programs where families, mothers and fathers are trained in how to deal with their children. “These programs are becoming more and more popular.”

“There are also anonymous programs, such as the telephone counselling service,” says Möller. “You should always turn to them if you think you have a problem.

For the five dead children help came too late. What will happen to the eleven-year-old brother now?

In coordination with the youth welfare office, he is currently staying with his grandmother. Stephan Hiller from BVkE says he needs intensive psychological support. “I would like the child to have the best support,” he said.