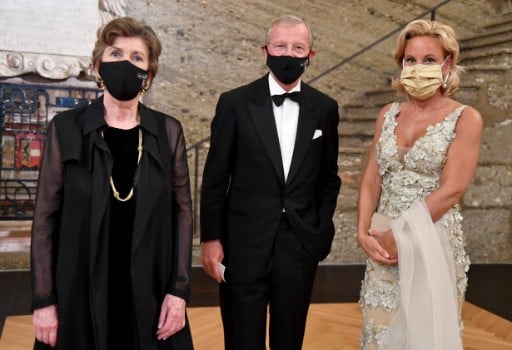 Guests at the Salzburg opera festival in August. Photo: DPA

A large choir on stage, wind instruments in the orchestra pit – both of these centre pieces of an opera performance are impossible this autumn.

With compromises and the courage to experiment, says Bernd Loebe, director of the Frankfurt Opera and chairman of the German-speaking Opera Conference, which includes the 13 largest opera houses in Germany, Austria and Switzerland.

“I don't want to say that the situation is desolate,” says Loebe, “but people are afraid that this could become a permanent state of affairs.”

The majority of opera directors expected politicians to be “more willing to take risks” when approving cultural events, he says.

“The opera is the safest place where you are guaranteed not to get infected,” insists Loebe. “If everyone who went to risky areas in the summer or celebrated on the banks of the Main had gone to the opera, we would now have fewer cases.”

All over the country, opera houses are struggling with constantly changing regulations and restrictions. The audience has to wear masks at least when entering and leaving. There is no gastronomy and no breaks.

But the hunger for culture is great. Tickets are selling out quickly. In Frankfurt, at the first tentative events after the forced closure, at 10 am some 100 seats were released – at 10:05 am they were all gone.

Opulent performances with huge instrumentation don't stand a chance under the current rules on spacing in the orchestra. Instead, works are now on the program that can manage with fewer musicians.

Scientists measure the aerosol output from wind instruments and the breath of the singers. But according to Loebe, the results are inconclusive; the recommendations change daily.

“We hope that we can manage a large part of our repertoire under these conditions,” says Loebe, “but we have to make compromises.”

For example, part of the orchestra could sit on stage. If the choir wears masks, a few more singers might be allowed. A live performance in Berlin in June. Photo: DPA

“The security officer is more important than the artistic director at the moment. Actually I should go on vacation,” jokes Loebe.

In order to prevent large ensembles from permanently disappearing from the repertoire, opera houses are thinking about commissioning arrangements for smaller ensembles or simply shortening long operas by acts.

Skipping the intermission is unpleasant for the audience, but impossible for the singers.

“We are killing every tenor in the world with it,” says Loebe. It is clear that Baroque is more in keeping with the corona rules than Richard Wagner, for example. “Nobody is currently thinking of 'Parsifal'”, says Loebe.

Normally, operas plan their repertoire long in advance, contracts between directors and singers have years of lead time – now, from one day to the next, it is Giovanni Battista Pergolesi instead of Jacques Offenbach.

But any seat that remains empty increases the hole in the municipal finances. Opera never covers its costs, but the question is how much the taxpayer has to pay per ticket.

So far, at least in Frankfurt, there have been no signals that the opera house will have to foot the bill, says Loebe. If the Corona state of emergency becomes a permanent state, that could change.