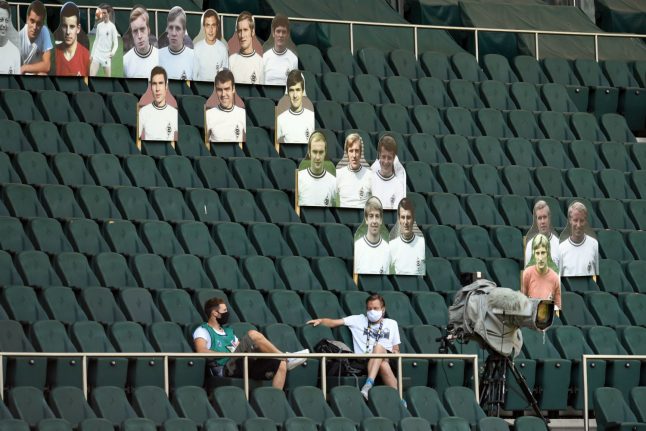 Cardboard cutouts of fans in a stadium in Mönchengladbach, North Rhine-Westphalia on June 27th. Photo: DPA

“All the clubs have prepared documents and are in talks with the (health) authorities,” said Christian Seifert, chief executive of the German Football League (DFL) after a virtual meeting of the clubs.

However, the return of fans to watch live football relies on the rate of infection of the coronavirus staying low and due to the uncertainty, Seifert anticipates “a demanding and difficult season”.

READ ALSO: All eyes on Germany as Bundesliga football returns

Earlier this week, Champions League semi-finalists RB Leipzig paved the way after being given permission by their local health authority to host 8,500 home fans.

That means 20 percent of their stadium's capacity can watch live their first home game of the new Bundesliga season on September 20th against Mainz, but only home fans are allowed.

Now Leipzig's German league rivals, including holders Bayern Munich who kick-off the new season at home to Schalke on September 18th, are following suit by holding similar discussions with the respective authorities in their area.

However, it is proving controversial in Germany.

In mid-August, senior politicians refused to back the proposed hygiene measures by the German Football League to allow fans back into stadiums.

“That would be the wrong signal,” said Germany's health minister Jens Spahn at the time.

That meant each club having to approach their respective health authority, responsible for the measures to restrict the spread of COVID-19, in order to get permission.

The return of fans is the subject of fierce debate in Germany, where numbers of new infections are slowly rising.

“The questions as to whether supporters in Bundesliga stadiums sends the wrong signs are absolutely justified,” admitted Seifert.

However, he offered a counter-argument that it could be a “sign that thousands of people want to, and can adhere to, rules of conduct” by following hygiene measures.

There are already fears that some clubs could be barred from hosting home supporters, potentially putting them at a disadvantage.”It makes a difference whether a club has 10,000 or 15,000 spectators in the stadium and other clubs have 500. Then there is no longer a level playing field,” warned Wolfsburg's managing director Jörg Schmadtke.

The German Football Association (DFB) has already sanctioned the return of a limited number of fans for the first round of German Cup matches from September 11th-14th, providing each host clubs' local health authority gives the go-ahead.