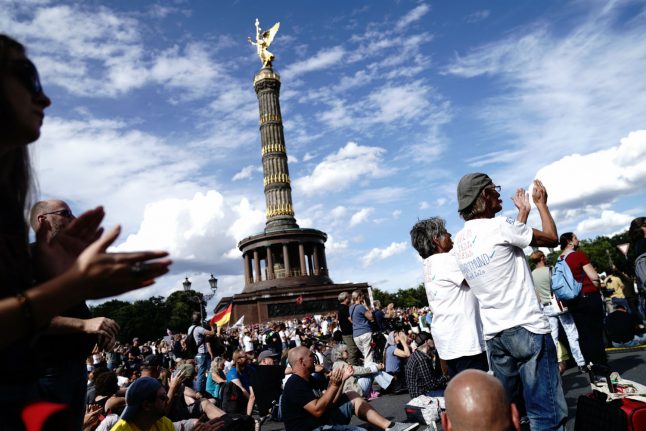 A coronavirus demonstration in Berlin on Saturday. Photo: DPA

A total of 38,000 people took to the streets of Berlin in various demonstrations on Saturday which were later broken up by police due to the lack of measures such as social distancing.

A more radical group of around 300 protesters tried to storm the German parliament, or Reichstag, before they were stopped by police.

But a new survey shows around two-thirds of Germans are completely against the Berlin protests, while an additional 11 percent say they simply don’t support them, according to the survey.

That brings the total to 76 percent, or only two percent less than when the same survey was conducted at the beginning of August, following another large anti-coronavirus demonstration in Berlin.

However, about 20 percent of the Germans surveyed said that they “definitely” have an understanding, or lean towards supporting the demonstrators.

The 21 percent of respondents who saw the protesters in a positive light are two percent more than in the last survey.

Voters from Chancellor Angela Merkel’s centre-right Christian Democrats (CDU) and the centre-left Social Democrats (SPD) were the least likely to back the protests: a full 90 percent said they were not in favour of them.

Among voters from the right-wing Alternative for Germany (AfD), however, 69 percent said they support the protests, up two percent from a month ago.

“These aggressive protests contradict the overall quite uplifting situation in Germany and the success of the measures taken so far,” wrote Spiegel Online.

“Although the number of infections rose sharply over the summer and with the travel season, the number of seriously ill and dead has stagnated so far.”

On Tuesday, Berlin revised its disease control law to require that demonstrations of more than 100 protesters have a mask requirement.

German Economic Minister Peter Altmaier also revised economic expectations for this year, painting a positive picture of the economic recovery he expected to see in the coming months.

German Health Minister Jens Spahn (CDU) said this week that he did not expect to see a second lockdown in Germany this autumn and winter, in part due to measures such as mask wearing that allowed for shops to remain open.