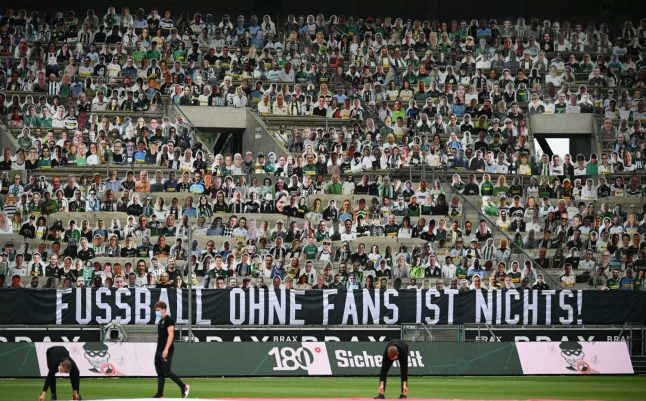 A sign in Borussia Mönchengladbach's stadium on May 31st reading "Football without fans is nothing." Photo: DPA

Matches in Germany have been played behind closed doors since the professional game restarted in May following the coronavirus lockdown.

“In the third division, the German Cup and women's matches, the number of spectators… must be decided by each club in agreement with local health
authorities,” the DFB said in a statement.

“This means that in some stadiums there may be fans, while in others, the home clubs may accommodate fewer, if any, spectators.”

Away supporters will still not be allowed to attend any games.

Most clubs will not be able to accept more than 1,000 fans, although there are some exceptions, with Magdeburg having been given the green light to host 7,500.

The DFB itself wanted 500 fans to attend Germany's Nations League match against Spain in Stuttgart on Thursday, but that request was refused by local authorities.

The top divisions, which are run by the German league (DFL) and not the DFB, could possibly see fans return on September 18th within the framework of health protocols proposed by the DFL.

But the Bundesliga is still expected to start its new season behind closed doors.

READ ALSO: How Germany plans for football fans to return to stadium in September