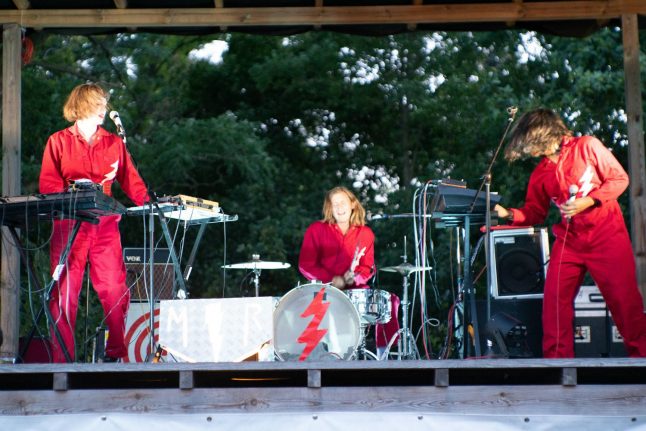 Few have been harder hit by the coronavirus pandemic than those working in the live music industry. Artists have been forced to cancel or postpone their tours, and weeks of empty stages have left music venues left struggling to make ends meet.

Berlin, often dubbed the clubbing capital of the world, saw its thriving nightlife and music scene obliterated overnight. The iconic Berghain nightclub has been temporarily repurposed as an exhibition hall and famous festivals such as Lollapalooza, which normally takes place in September, have been cancelled entirely for 2020.

With confirmed cases on the rise again across Europe including Germany, the immediate future for live events looks bleak.

One punk rock festival, however, is determined that the show must (safely) go on.

Following a successful debut in 2019, the Heinersdorfer Punk Fest in Berlin had hoped to expand even further this year.

But the onset of the pandemic in March quickly threw their plans into jeopardy, with the Musicboard Berlin closing their pot of funding as public health concerns grew.

Soon after, however, the board announced that new financial support would be made available to event hosts able to plan ‘pandemic-proof’ events.

Dyan Valdés, co-organizer and member of the band Mexican Radio, spoke of their willingness to rise to the challenge.

“Our industry was the first to shut down and will likely be one of the last to fully reopen. It’s very important for us to find a way to partially reopen that would be safe for audiences and feasible for musicians and organisers,” she said.

In order to keep attendees safe, the festival will operate at a reduced capacity of 150. Hygiene stations will be present across the site, a designated COVID-19 team will enforce social distancing and contact information will be taken at the door.

“We are not going to find any loopholes, we take our responsibility to keep the community safe very seriously,” Valdés added.

“It’s hard knowing what things will be like when the festival happens on September 26th. If anything changes between now and then we will modify our plan and make sure it’s the safest it can possibly be.”

Concerts are being cautiously observed elsewhere in Germany: At the weekend in Leipzig, a local university launched a series of pop concerts under coronavirus conditions, hoping the mass experiment with 4,000 people can determine whether large events can safely resume.

Heinersdorfter will, of course, be far from a ‘typical’ Punk festival. Social distancing regulations mean that sprawling crowds and mosh-pits will remain out of reach for revellers for some time.

But after months of uncertainty, Valdés is hopeful that the change in atmosphere will not put people off.

“Everyone’s just so excited at the idea of being able to experience live music again that they’re happy to come. They recognise that it’s going to be a little different… but this is what we have to do to get through.” The beleaguered music industry undoubtedly faces a long road ahead – strict hygiene regulations will make reopening or touring financially unviable for many venues and artists.

With many smaller bands relying on live gigs to survive, open-air events like the Heinersdorfer Punk Fest could be a vital lifeline for the thousands of people who work in Berlin’s local music scene.

READ ALSO: Germany strives to kickstart culture in a world blighted by virus

“When we talk about live music we are not just talking about musicians. We are talking about tour managers, sound engineers, lighting designers and backline technicians […] there’s this huge economy that completely shut down without any idea of when it would reopen again.”

“These smaller bands and artists make Berlin a very vibrant city, and I think it would be very dull without us,” Valdés said.

Event organisers across the capital are trialling open-air formats in a bid to bring live music back to audiences.

Berlin’s Waldbühne plans to host a series of concerts next month as part of a “Back To Live” initiative, whilst famous artists such as LEA and Milky Chance have played at “Picnic Concerts” in Marienpark.

According to Valdés, events such as these are vital in helping restore public faith and rekindling community spirit.

“It’s important that [we] have this opportunity to show the whole country that it’s possible for live music to come back in a way that could be safe and fun,” she said.

Mexican Radio drummer Hannes Neupert hopes that the festival, which is free to attend, will allow people to support smaller artists in a neighbourhood unknown to many.

“We had such a great time at last year’s festival that we knew we had to return! This year will be even more special after such a long break from live music.”

The Heinersdorfer Punk Fest will take place on September 26th. Entrance is free and on a first come, first served basis.