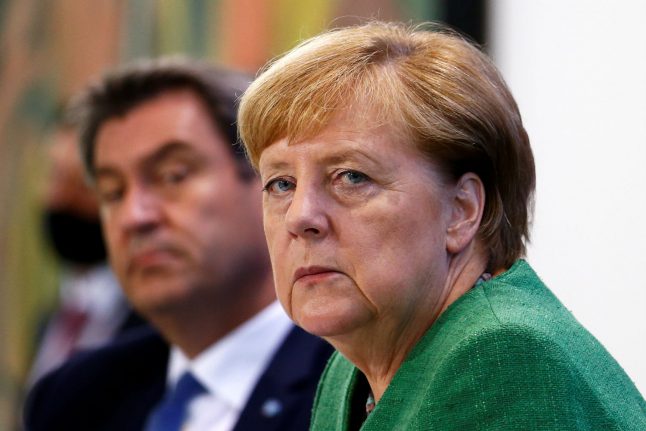 Merkel spoke out after a meeting between the federal and state governments on Thursday.

The federal and state leaders spent more than five hours discussing how to tighten coronavirus measures in the face of rising infection rates.

The new regulations agreed on include a minimum fine of €50 for anyone caught without a face mask in places where wearing one is compulsory, such as in shops and on public transport.

Germany also plans to extend a ban on large events from the end of October until December 31st. It will apply to everything from festivals and concerts to large sporting events with spectators.

The corona pandemic is a “challenge”, Merkel said after the conference held online. So far, Germany has “come through the pandemic well”, she added.

However, the increase in infections over the summer months was being taken very seriously. “Additional loosening of restrictions cannot be justified,” said Merkel.

She cited private parties and increased holiday-related travel as the reasons for increased infection rates.

“Corona is fully back in Germany,” said Bavarian state premier Markus Söder at the press conference.

“The numbers are going up too high too soon,” he said, adding that Germany had to prevent a “second lockdown”.

Merkel explained that many of the cases were linked to people returning from risk areas. She warned against people in Germany taking non-essential trips to areas classed as high risk, such as the US and India.

“We have decided today, and this is new, to call for travel to designated risk areas to be avoided wherever possible,” Merkel said.

For months now, people returning from high-risk areas have had to quarantine after travel.

The federal and state governments appealed for people to comply with the quarantine obligations. Checks by local authorities will be stepped up and fines will be imposed if people are caught flouting rules.

“Those who violate the obligation will be subject to severe fines,” said Merkel.

Meanwhile, anyone who knowingly goes on an avoidable trip to a risk area and suffers a loss of earnings due to the quarantine obligation will not be paid compensation in lost wages in future.

Germany earlier this month introduced free mandatory tests for travellers returning from high-risk areas and free voluntary tests for those coming back from elsewhere.

But following concerns that German labs were becoming overburdened, the government will scrap the free tests for those returning from non-risk areas from September 15th.

Returnees from risk areas will have to go into quarantine and will not be allowed to take a test before the fifth day after their return.

This is to stop an infection from remaining undetected during the last days of the stay abroad. The quarantine can be ended after a negative result of this test. Bavaria will continue to provide free tests, also for returnees from non-risk areas, until at least October 1st.

The government is also set to examine whether people returning from travel should pay for the test themselves.

Under Germany's federal system each state has the right to impose its own coronavirus regulations, leading to a patchwork of rules which many say leads to confusion.

The current penalties on flouting mask rules for instance vary wildly, from €40 in Hamburg and €250 in Bavaria to no fines at all in Brandenburg.

Federal and state governments – with the exception of Saxony-Anhalt – agreed on a minimum fine of €50 for people who violate the obligation to wear a mask.

Saxony-Anhalt's state premier Reiner Haseloff said his state was instead enforcing a ban on public transport for passengers without a face covering.

Private party numbers to be looked at again

Private social gatherings in Germany should be held outdoors when possible – and have as few participants as possible. Merkel and the state leaders were unable to agree on an upper limit on the number of people at gatherings in private homes.

Originally, the government had proposed 25 people as a limit.

“Depending on the regional occurrence of infection, restrictions are to be imposed on private celebrations, for example by lowering the maximum number of participants,” the resolution states.

“The states have very different ideas, which could not be brought together today,” Merkel said. But she wants to “continue discussing the topic”.