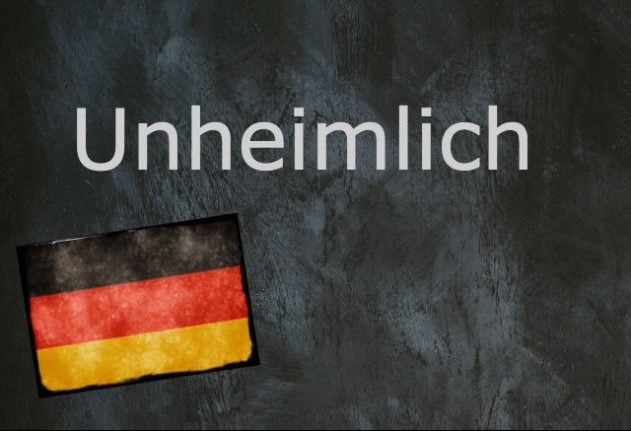 Generally understood to denote a feeling of unease and uncomfortableness, the German word unheimlich is associated with negative emotions such as dread, fear and terror.

There are two primary interpretations of the word’s etymology. The first is that the core of the word lies in the noun ‘das Heim’, meaning ‘home’. The added ‘lich’ is similar to the English suffix ‘-ly’, and is used when a word is ‘like something’, leaving us with the word ‘homely’.

Yet when prefaced with the prefix ‘un’, used to denote when a word is not something, we have something that is ‘not homely’, or something strange, eerie, and which creates a feeling of unease.

READ ALSO: The complete A-Z guide to German prefixes and what they mean

This makes sense when considered as the opposite to the feeling of security and refuge that we feel within the four, safe walls of our home – our familiar space.

However, the word can also be broken down into just two parts: the same prefix, un, followed by ‘heimlich’, which as well as ‘homely’, also means ‘secret’ in relation to ‘das Geheimnis’ (the secret).

This means that the word could also mean the ‘un-secret’ – something that is already known to us or has come to light in some way. The painting 'Das Geheimnis' (The Secret) by Felix Nussbaum on display in Bonn in 2016 as part on an exhibit entitled 'Unheimlich'. Photo: DPA

The concept of unheimlich was first outlined by German psychiatrist Ernst Jentsch, who identified E.T.A. Hoffmann’s Der Sandmann (The Sandman) as a prime example of the uncanny in literature.

Sigmund Freud then elaborated on this interpretation in his 1919 essay ‘Das Unheimliche’, where he wrote of the two possible meanings, “both courses lead to the same result: the uncanny is that class of the frightening which leads back to what is known of old and long familiar”.

Unheimlich can therefore be used to refer to something that is both known and unknown at the same time – both ‘not homely’ and yet ‘not secret’.

Artists have since utilised the phenomenon to create works which combine familiar objects but present them in a way that stirs up uncomfortable feelings.

It can also be used as an adverb, and equated with the English ‘very’ or ‘incredibly’.

Es war unheimlich ruhig in der Hauptstadt. It was eerily quiet in the capital city.

Das war unheimlich gefährlich. That was incredibly dangerous (unsettlingly so).