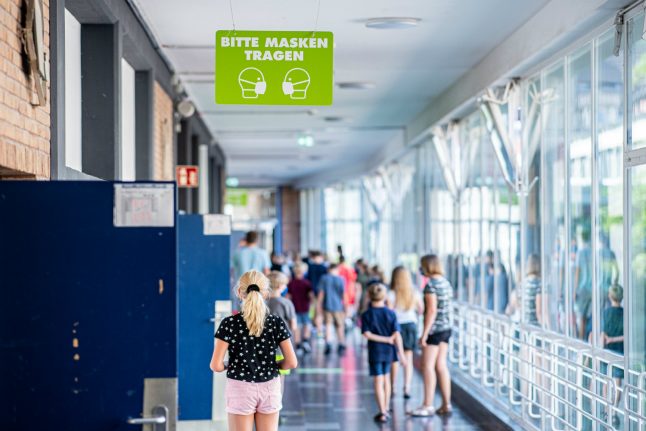 Children at a school in Münster, NRW, in August. Photo: DPA

The Schulleitungsvereinigung (SLV) NRW, the union that represents head teachers in the state, said measures to contain the spread of Covid-19 can't be implemented in some schools, reported the Tagesschau on Tuesday.

In the letter, which was submitted to German broadcaster SWR, the association accuses the education ministry of failing to take into account conditions on the ground.

They say classrooms cannot be ventilated properly and there's a lack of cleaning staff.

Meanwhile, outbreaks are heavily affecting schools. On August 19th, the last available update, there were 30 confirmed coronavirus cases affecting staff and 306 cases among pupils in NRW. The ministry said 524 teachers and 5,001 students are also in quarantine.

The state of NRW prescribed strict measures at the start of the new school year in a bid to stem the spread of Covid-19.

Among those rules, students at secondary schools have to wear a mask not only during breaks, but also in class. In addition, teachers are required to air the classrooms regularly, and the minimum distance of 1.5 metres applies throughout the entire school building.

But these rules are proving to be unrealistic in many buildings, the letter from the headteachers states. Some principals reported that windows are welded shut which makes ventilation impossible, while others pointed out a lack of cleaning staff or janitors.

The letter also pointed to problems with the organisation of lessons proposed by the education ministry.

For example, the requirement “of the exclusive use of teachers in fixed learning groups” is not feasible, they said.

There are also concerns about the procedures for when teachers are off sick. Meanwhile, some classes are taught by teachers who are usually deployed at several different schools. This poses a risk during the pandemic.

“A real interest on the part of the education ministry in the reality on the ground in schools cannot be established,” the association concluded.

The group said they hope the letter would have consequences and that the public would become aware of “how ailing our education system is” which is “now finally becoming visible through corona”.

The state education ministry defended the concept for adapted school operation in NRW at the request of SWR. The ministry said its guidelines are “broadly based” so that they offer the possibility of “reacting appropriately to the development” of the infection situation.