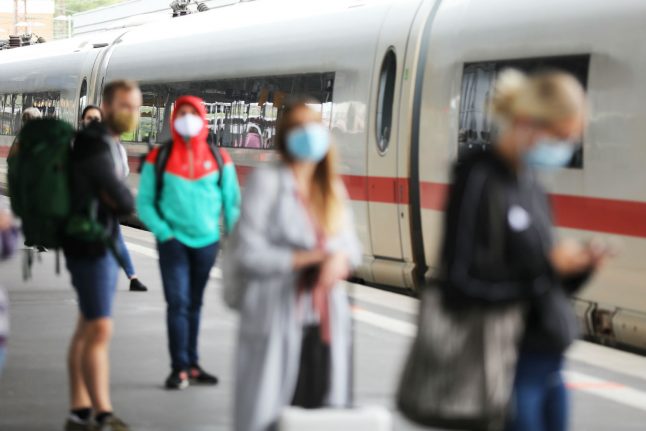 “Wearing a mask is not an optional recommendation, but rather compulsory. To us, it is therefore unacceptable for individuals not to adhere to the rules,” Hans-Hilmar Rischke, DB Head of Railway Security, told DPA on Monday.

“As a result, we are systematically increasing the presence of security staff,” he said.

Exactly which cities and stations will now begin to see increased inspections remains unclear, however.

“Our security staff will be specifically deployed where they are needed,” said Rischke.

DB evaluated video footage at six S-Bahn stations in Hamburg, and spotted multiple violations of the mandatory face mask rule, according to a report by Bild.

Just a week ago, DB announced that it would expand its monitoring of mask wearing by having security personnel present on trains travelling long distances.

By September 1st, there are slated to be regular checks on 120 trains.

DB will not be directly issuing fines, but instead offering free, disposable masks to anyone without one, and removing any “mask refusers” from the train.

They have however expressed their support of a couple states – Bavaria and North Rhine-Westphalia – who said they would fine those who refused to wear a mask.

North Rhine-Westphalia has already bulked up security staff in regional trains and on the S-Bahn, and began checking for masks more thoroughly on Monday.

According to the state's ministry of transport, railway staff is required to hand over people who refuse to wear masks to federal police.

Since August 12th, a fine of €150 has been issued to those caught without a face and nose covering.