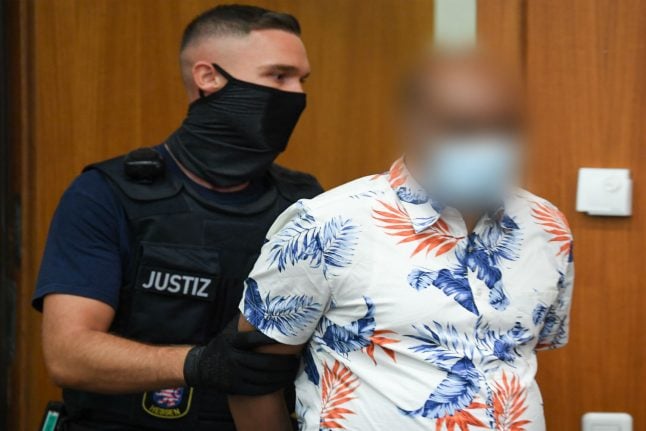 The suspect entering the courthouse on Wednesday. Photo: DPA

“I am infinitely sorry, especially for the family,” suspect Habte Araya said in a written statement read by his lawyer at the opening of the trial in Frankfurt.

The suspect is accused of pushing the eight-year-old boy and his mother onto the tracks in an apparently random attack at Frankfurt's main station last July.

The mother was able to roll off the tracks to avoid the oncoming high-speed InterCity Express train, but the boy was killed instantly.

READ ALSO: Boy, 8, dies after being pushed in front of train in Frankfurt

Araya said he could not remember the crime but it “must have happened according to all the information I have received”, adding that he was “very seriously ill” at the time.

The suspect, who had entered Germany from Switzerland days earlier, is also accused of trying to push a 78-year-old woman onto the tracks, although she managed to save herself.

That woman told the court on Wednesday she remembered seeing the boy and his mother “flying through the air” after the suspect pushed them, and that the platform was filled with “sheer horror”. Flowers left at the crime scene in July 2019. Photo: DPA

The tragic case led the far-right AfD party to call for tighter controls on foreigners entering Germany, although the suspect was not in the country illegally.

Following a psychiatric assessment, prosecutors said Araya was suffering from paranoid schizophrenia and had “at least a considerably reduced ability” to control his actions.

They say he committed manslaughter, attempted manslaughter and dangerous bodily injury and have applied for him to be placed in a secure psychiatric institution.

He could also be found to have committed murder and attempted murder if he is deemed to have acted with malice and “deliberately exploited the victims' defencelessness”.

Judges said Wednesday they saw “a whole series” of indications that mental illness could have rendered him unable to control his actions.

Araya did not previously know the victims and showed no signs of alcohol or drug use at the time of the attack, according to prosecutors.

READ ALSO: Man accused of pushing boy under train in Frankfurt is father of three

The case shocked Germany and led politicians to call for heightened security, including more camera surveillance at train stations and tighter border checks.

A government spokesman said last week that plans for increased security in stations were still under review, but had been slowed down due to coronavirus restrictions.

Germany's far right highlighted both killings to once more criticise what it regards as the flawed immigration policies of Chancellor Angela Merkel's government.

“Protect the citizens of our country at long last,” the anti-migration AfD party's parliamentary group leader Alice Weidel tweeted at the time.

He was even featured in a campaign by Swiss authorities to promote postive integration.