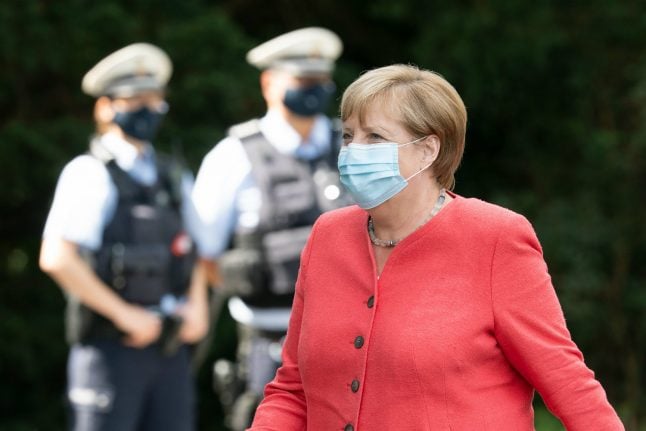 She urged Germans to follow the rules on hygiene precautions and reminded travellers returning from risk areas that quarantine was not an option “but a must” so long as they could not show a negative test.

Germany was seen as an early success story in suppressing the virus but its progress has been undermined in recent weeks as numbers have crept up over the summer holidays.

Germany has in recent weeks reported an average of well over 1,000 new cases a day, compared with around 350 in early June.

“The number of cases across Germany has doubled over the past three weeks,” said Merkel “This is a trend that cannot continue and must be halted.

“I believe there can be no further loosening (of restrictions) at this point.

“When I say we need to pull in the reins I mean the rules need to be enforced very consistently.”

People awaiting their results must stay in quarantine at home until the test comes back negative, Merkel said, warning that those who fail to comply faced fines.

She also welcomed tougher checks on compliance with hygiene precautions on buses and trains, such as mask-wearing and keeping a physical distance from others.

“If we comply with all of this the good news is that much of public life can carry on, everyone can do their bit,” Merkel said.

Merkel said the priority was to “keep economic life going” to protect jobs and to keep schools and daycare centres open.

School children across Germany have started returning to the classroom after the summer holidays, facing a slew of new regulations such as staggered arrival times and mask wearing in a bid to contain the spread of the virus and avoid new school closures.

As of Tuesday Germany had recorded a total of 225,404 coronavirus cases and 9,236 fatalities.

Merkel spoke out during a visit to the most populous state of North Rhine-Westphalia (NRW). The Chancellor was attending the state cabinet meeting for the first time after being invited by NRW premier Armin Laschet.

It comes around a month after Merkel visited the Bavarian state cabinet in the plush surroundings of Herrenchiemsee Castle, which led media to speculate if state premier Markus Söder was being endorsed as her successor.

IN PICTURES: Merkel receives the royal treatment in Bavaria

Laschet, who's also a possible successor for Merkel when she steps down as Chancellor next year, called for tougher measures against the spread of the virus.

In the current health and economic pandemic situation, “close cooperation between the federal and state governments is more important than ever” he added. According to German daily Bild, Merkel had warned at the presidium meeting of her party on Monday of an escalating situation. “You have to tighten the reins in order not to run into a corona disaster,” she reportedly said.

Merkel and Laschet were also set to visit the Zollverein coal mine. The Chancellor's visit was an “important signal” for the Ruhr area and the entire state, Laschet said.

“All the major challenges that have to be overcome in Germany are particularly evident in North Rhine-Westphalia,” he said. With around 18 million residents, NRW is the most populous state in Germany – and currently records the highest number of new coronavirus infections per day.

Laschet welcomed Merkel with an elbow bump. The Chancellor discreetly pointed out the coronavirus distance rules to him. Nearby, dozens of lignite opponents and critics of coronavirus protection measures protested separately but loudly.

Merkel was welcomed by the state cabinet with two gifts. Laschet presented the Chancellor with Beethoven's collected works on CD and an aerial view of the city of Templin in Brandenburg, where Merkel grew up, from 1929.