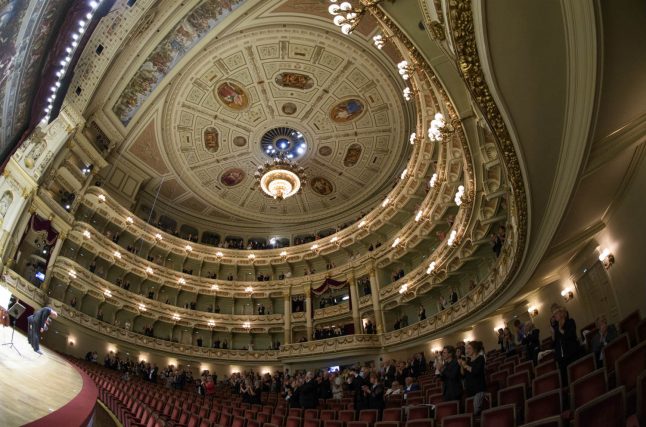 Dresden's Semperoper upon reopening on June 19th, with only partial capacity. Photo: DPA

Opera venues and concert halls across the country have been amongst the hardest hit by the ongoing coronavirus pandemic.

The deficit of the Berliner Philharmoniker is expected to amount to €10 million this year, according to general manager Andrea Zietschmann.

READ ALSO: Germany aims to kickstart culture in a world blighted by virus

The Philharmonic, along with other newly-reopened venues, is holding events at significantly reduced capacity, with only one in every four seats occupied on average.

Performance intervals have also been scrapped, along with classical pieces requiring a full-scale orchestra.

Could this change soon?

According to new recommendations published by leading epidemiologists at the Chartié Institute for Social Medicine and Epidemiology and for Hygiene and Environmental Medicine, however, classical concerts held at full-capacity may be possible.

In a statement given to the broadcaster RBB (Rundfunk Berlin Brandenburg), the Institute suggested that all seats could be occupied, provided that every audience member wears a face covering. The inside of Hamburg's concert hall. Photo: DPA

Professor Stefan Willich, Director of the Institute for Social Medicine and Epidemiology, highlighted that the typical audience behaviour at classical concerts could reduce the risk of the virus spreading.

“The unique thing about classical concerts is that the audience is normally sophisticated and very disciplined, that nobody speaks during the concert and that everybody sits quietly in a row, rather than across from each other,” he told RBB.

“When you wear a face covering, around 95 percent of the viral load is absorbed. That means that you yourself are protected, as well as those sitting across from you.”

Safer than the supermarket?

According to Willich, who is a conductor himself, a classical concert could actually be safer than a trip to the supermarket or travelling on public transport.

He is, however, aware of the higher risk posed to the older members of the population, who make up the majority of audiences at such concerts.

“The risk-factors for coronavirus are old age and relevant chronic diseases. I think that if you belong to a high-risk group, you should and will decide for yourself whether to go out in public or take certain risks, even if said risks are very small.”

He also stresses that wearing a face-covering alone is not sufficient, highlighting the importance of adequate ventilation to ensure proper air filtering as well as social distancing in entrance halls, foyers, and toilets.

Catering facilities should remain also closed and all surfaces, such as door handles, armrests and stair rails should be thoroughly cleaned after each performance.

He also recommended that entry to the venue be contactless and that the contact details of every audience member be taken.

Their findings also show that separating wind players with plexiglass may also no longer be necessary. This would mean that orchestras could return to an arrangement almost identical to that used before the pandemic. The empty amphitheatre of the Bavarian Staatsoper in 2017. Source: DPA

In a statement given to The Local, however, the Executive Board of the Charité distanced itself from the published paper and its recommendations:

“The ‘Statement on the Public Operations of Concert Halls and Opera Houses during the COVID-19 pandemic’, which concerns the resumption of operations under coronavirus restrictions is not a coordinated paper. It does not reflect the position of the Charité Executive Board.

READ ALSO: The most fascinating facts about Beethoven to mark his 250th birthday

“The proposals do not consider current trends in infection rates and the risks associated with this. The paper is therefore not to be seen as a proposal for action, but rather as the basis for further critical discussion within the framework of the Berlin testing strategy.”

Berlin Senator for Culture, Klaus Lederer, also expressed his surprise at the announcement.

“We have spent months working in close contact with experts to ensure everything that is epidemiologically justifiable can go ahead.

“In this respect, we are surprised by this recommendation from the Charité, which we learned about through press inquiries”, he told the Tagesspiegel newspaper.

Tickets for the start of the Berliner Philharmonic’s 2020/21 season went on sale on the August 17th.

There are around 2,200 seats available for concerts until the end of October, around 25 percent of normal capacity. It is hoped that the federal government will cover a third of the venue’s loss in income.