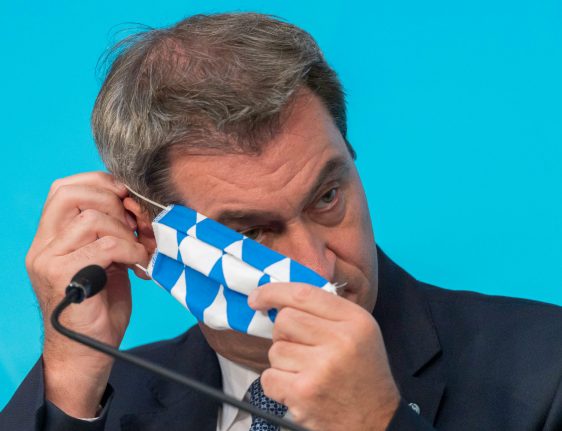 Söder was forced to apologise on Thursday over an embarrassing delay to thousands of coronavirus test results, just as Germany was seeing a new spike in virus cases.

Some 44,000 people who took advantage of free coronavirus tests in the southern German state have had to wait more than a week for their results, Bavarian health minister Melanie Huml admitted on Wednesday.

These included around 1,000 people who tested positive, Huml said at Thursday's press conference, adding that 900 of them had now been identified and were being informed after officials worked through the night to clear the backlog.

Many of those tested were travellers returning to Bavaria and other parts of Germany after their holidays.

“This is a difficult situation, no question,” Söder told a press conference in Munich, calling the delays “annoying” and “regrettable”.

“The entire state government is sorry that these mistakes were made… and that now many people are unsettled,” he said.

Huml said the delay, which affected tests carried out at centres along the region's motorways and in train stations, had been caused by problems with processing handwritten contact details.

Söder said his health minister had offered her resignation but he had not accepted it, calling the delay a failure “not of strategy, but of execution”.

Green party politician Michael Kellner, however, said on Twitter that it was “the result of a policy that focuses on style instead of substance”.

“The fact that no one is facing personal consequences after a scandal of this magnitude is an indictment and damages our political culture permanently,” said Daniel Föst, head of the state's Free Democrats (FDP).

“Huml is no longer acceptable as health minister after the test disaster.”

Andreas Zapf who was head of the State Office for Health and Food Safety, is to be replaced following the debacle. This move was also met with criticism from the opposition.

Vice-president of the Bavarian state parliament, Markus Rinderspacher of the Social Democrats (SPD), tweeted: “Now an administrative officer is taking political responsibility for a striking misconduct that had its origin in the carelessness of the state government. That is responsibility culture à la CSU”.

Will this fiasco dent Söder's image?

Söder has won plaudits for his handling of the coronavirus crisis in Bavaria, being the first to implement several measures in his state that were later adopted on a federal level.

He has also topped recent surveys on who Germans would like to see as their next chancellor after Angela Merkel's term comes to an end in autumn 2021.

But the testing debacle could dent his public image, coming just as concerns grow in Germany over rising virus cases and the possibility of a second wave.

The country recorded 1,449 new cases in 24 hours on Friday – the highest number seen since early May.

Numbers have been slowly creeping up over the past few weeks, with ministers blaming travellers returning from holidays and young people having parties.

Anyone returning to Germany from an area deemed high risk is required to take a coronavirus test.

Germany has so far fared better than many of its neighbours in its handling of the crisis, but Söder said Thursday that returning holidaymakers would represent a big challenge in the coming weeks.

“The holidays are a big risk for infection in our country,” he said.

“The numbers are increasing and if we are not careful we will be in a very difficult situation in a few weeks.”