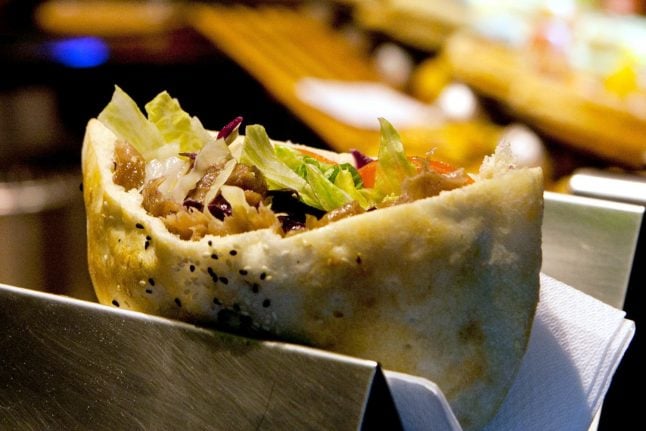 A typical German Döner at a snack bar in Stuttgart. Photo: DPA

Succulent grilled meat cooked on a vertical spit, served in a flatbread with fresh salad and a sauce of your choice: the Döner is now the go-to lunch or late-night snack for millions across Germany.

The industry itself is worth more than €3.5 billion a year and a spectacular 600 tonnes of Döner meat is eaten nationwide every single day.

A specialty born in Berlin?

But where did this ground-breaking culinary invention come from? The most widely held assumption is that the Döner was invented by Kadir Nurman, a Turkish Gastarbeiter (guest worker) who emigrated to West Germany in the 1960s as part of the post-war reconstruction effort.

After moving from Stuttgart to Berlin in 1966, Nurman quickly noticed that there was a distinct lack of convenient lunch foods for the city’s busy workers.

That was when the idea struck him. He thought that kebab meat, which had been served on plates with rice in Turkey since the mid-1800s, could be sold in a portable sandwich form to people on the street.

Shortly after, in 1972, he decided to leave his job as a mechanic and set up an Imbiss (snack bar) near the Zoo in former West Berlin.

The Döner sold in this kiosk would be unrecognisable to many Germans today: rather than the familiar trimmings of salad and sauce, Nurman’s flatbreads were filled only with kebab meat, onion and some lettuce. Döner meat turns on spits in a snack bar in Munich. Photo: DPA

Nevertheless, hungry Berliners soon warmed to the idea, and before long new Döner shops started to pop up across Germany and worldwide.

As Nurman did not patent the idea, he did not benefit financially from the Döner’s later success. In an interview with Frankfurter Rundschau, however, he expressed his joy that so many Turkish people have been able to make a living by selling the fast-food snack.

READ ALSO: This is what is really inside your Döner kebab

In 2011, two years before his death, he was given a lifetime achievement award by the Association of Turkish Döner Manufacturers, and he has since been widely credited as the “inventor” of the beloved dish.

Whilst the Döner’s global appeal remains undisputed, however, the accuracy of this origin story has been thrown into doubt in recent times.

Some argue that the Döner was, in fact, not a “German” invention at all. The concept of a rotating vertical kebab originates, much like the kebab meat itself, from Istanbul in the 1940s, whilst the Greek take on the dish (known as the gyro) had already proved itself to be a hit in the cities of Athens, New York and Chicago by 1971.

What is more, Nurman is not the only German to have laid claim to the Döner’s invention. In 2012, a Turkish man named Nevzat Salim came forward as a contender for the title, alleging to have sold the first Döner from a stand in the town of Reutlingen in the southwestern state of Baden-Württemberg in 1969.

A similar claim was made by another Turkish Berliner, Mehmet Aygün, who insists he invented the Döner in 1971.

With so many conflicting theories, it seems that the question of who brought the Döner to the streets of Germany may never be truly answered.

It could, naturally, be possible that several people happened to come across the idea around the same time.

But if there is one thing for certain, it’s that the dish has proved itself to be an important part of the Turkish community’s integration into German life.

So, next time you feel guilty for snacking on a late-night Döner, take comfort in the fact that you’ll be supporting an industry that has provided employment for thousands and left a lasting mark on the country’s culinary landscape.