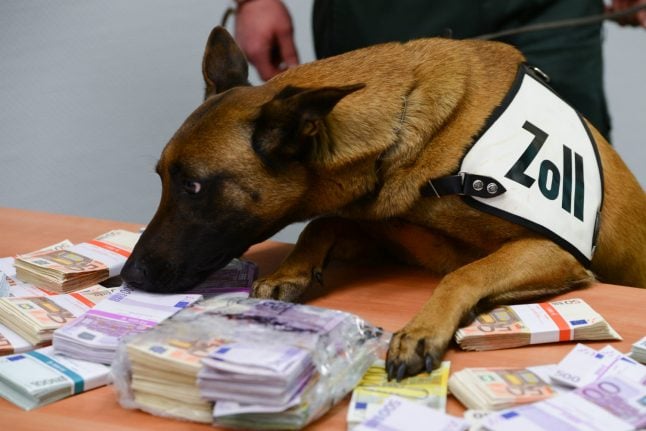 Here's an archive photo of Aki with some of her cash finds. Photo: DPA

Aki, a nine-year old Belgian Shepherd dog based at Frankfurt's international airport in Germany, sniffed out almost a quarter of million euros in cash from travellers in a few days.

In one incident, the nosy mutt sniffed out almost €52,000 in the belt bag of a passenger.

Other cash was found in handbags, shoulder bags and inside jacket pockets.

“With her keen nose, Aki supports the custom officers… in the fight against tax evasion, money laundering and international terrorism,” said Isabell Gillmann, spokeswoman at the customs office in Frankfurt, Germany's business capital.

All 12 travellers could face fines.

In 2019, customs officials in Frankfurt caught passengers carrying a total of around €23.6 million in undeclared cash.

German sniffer dogs may also be put to use in the battle against coronavirus.

Researchers from Hanover's University of Veterinary Medicine found in July that man's best friend could detect Covid-19 in human samples, suggesting that in future they could be deployed in transport centres or sporting events.