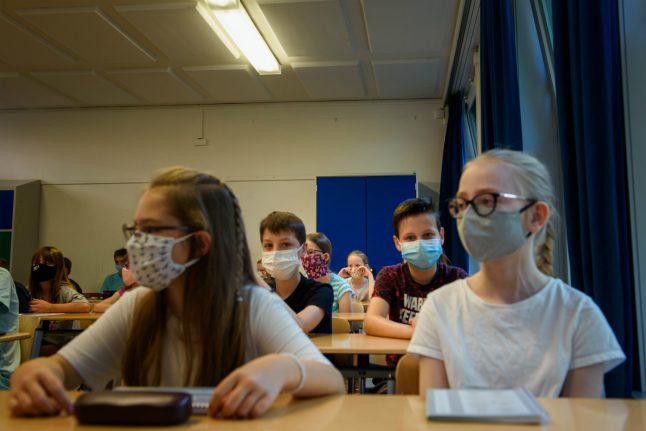 Pupils in Kiel, Schleswig-Holstein, back in the classroom on Monday. Photo: DPA

On Monday, children got back in the classroom in Schleswig-Holstein, Berlin and Brandenburg. And on Wednesday North Rhine-Westphalia will reopen its schools after the summer break.

However, it's not business as usual because protective measures to control the spread of coronavirus are in place in schools across Germany.

Last week pupils in Mecklenburg-Western Pomerania and Hamburg were the first to return to the classroom after the summer break.

The aim is to get back to 'regular operation' as much as possible. However, there's been a debate in Germany over whether children should be forced to wear face masks while at school, including while they are sitting at their desks.

In Schleswig-Holstein, the education ministry has stopped short of introducing compulsory masks and instead recommends that pupils and teachers wear a mouth and nose covering during the first two weeks of school – even during lessons.

Yet proving the threat of coronavirus is ever present, a school near the city of Husum has already been closed as a precautionary measure for the coming week due to a teacher becoming infected with Covid-19.

Negative results from colleagues who were tested on Sunday, however, could mean that the pupils might be allowed to return to class earlier than planned, the district of North Frisia confirmed.

READ ALSO: Lunchbox, pencil case and mask: How German schools are restarting amid the pandemic

In Brandenburg, the neighbouring state of capital Berlin, students and teachers are required to wear masks in corridors, stairwells and cantines, but not in classrooms and school playgrounds.

As the cabinet is not set to discuss coronavirus regulations until Tuesday, face masks are initial voluntary. But that could change if politicians decide they should be mandatory.

The hygiene plan calls for a minimum distance of 1.5 metres between teachers, but not for pupils. However, children should sit in the classroom in such a way that close contact during lessons is avoided as much as possible. The minimum distance of 1.5 metres is also no longer in place in Berlin's schools. Instead, the Senate decided to make masks mandatory in school buildings. So staff and pupils must wear a face covering in corridors, recreation rooms and meeting rooms, but not in classrooms or in the schoolyard.

Bumpy start to the school year

In the eastern state of Mecklenburg-Western Pomerania, hundreds of children were sent home after two schools had to be closed again on Friday – in the first week of the new school year – due to coronavirus cases.

In Ludwigslust, where the Goethe Gymnasium was closed on Friday because of a teacher's Covid-19 infection, tests will continue on Monday. According to authorities, the 55 school staff will be tested again. A first round of testing on Saturday revealed two further teachers had picked up the virus.

The first teacher to test positive had not given any lessons since the start of school one week ago, but had taken part in a training course and possibly passed on the virus.

The 205 students who have had contact with the two newly infected teachers are also to be tested. They have all been ordered to quarantine.

On Wednesday, the most populous state of North Rhine-Westphalia (NRW) will start classes in secondary and vocational schools with compulsory masks in the classroom.

State premier Armin Laschet defended the move by saying coronavirus precautionary measures were needed in a bid to do everything possible to keep children at school during the crisis.

The mask rule is initially only in place until the end of August.

The North Rhine-Westphalian Association of Cities and Towns said it supported compulsory masks at the beginning of the school year in principle, but calls for practical changes to it when needed, such as during the current heatwave.

“On hot summer days we need more generous heat-free decisions,” said the chairman of the Association of Cities and Towns, Pit Clausen.

On the wider debate of schooling in corona times, some German politicians are calling for the country to modernise its digital offering in schools at a faster space.

Katja Suding, deputy head of the Free Democrats' parliamentary group in the Bundestag, demanded that schooling be ensured both face-to-face and digitally.

“With a Digital Pact 2.0, Education Minister Anja Karliczek must finally take a quantum leap for the nationwide digitization of schools,” she told the Redaktionsnetzwerk Deutschland on Monday.

She said any further loss of lessons for pupils would have huge consequences for the educational opportunities for many young people.

The Digital Pact aims to ensure that schools in Germany are better equipped with digital technology by 2024.

READ ALSO: When do summer holidays start and end in Germany's schools?