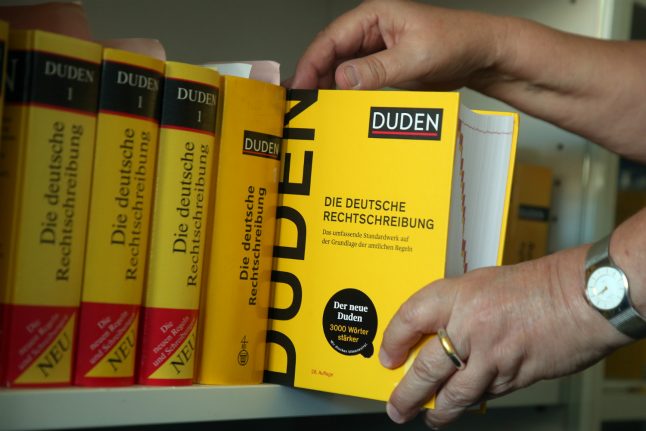 Are you ready for the new and improved German language? Photo: DPA

With words like Zahnfleisch (literally tooth meat or gums), it's fair to say that German vocabulary is nothing short of brilliant.

And now there are even more words that have crept into the new edition of the famous Duden German dictionary.

There are almost 1,300 pages on the new edition of the Duden, which is set to hit the shops on Wednesday.

As you would expect, the pandemic has influenced language quite a bit.

But it's not really become a “Corona Duden”, editor-in-chief Kathrin Kunkel-Razum told DPA. There have also been developments in other topics such as the climate and environment, technology and gender justice.

According to the publisher, 3,000 new words are included in the 28th edition, bringing the total number of words up to 148,000.

What are the new coronavirus-themed words?

Among the new entries are words that would have been riddles just a year ago: Covid-19, Reproduktionszahl (reproduction number) and Lockdown.

“Coronavirus was already in it anyway,” said Kunkel-Raum, likely due to the Sars outbreak in 2002/03.

“Corona” was also already in the Duden but with two meanings: as a female first name and as shortened version of coronavirus disease. For the first time, users can find information on gender-appropriate language use in the Duden.

Kunkel-Razum said she is eagerly awaiting the reactions to the new three pages on this topic because it will likely spark debate.

Editors have made an effort to describe the problems and the currently available solutions when it comes to gender in the German language.

For example, the Duden now reports on the controversial gender star. Editors say this variant is “becoming increasingly accepted” in writing practice.

It's found particularly in contexts in which gender is no longer understood as being only female or male and the possibility of further categories should be indicated. The following example is given: “Schüler*innen” (school pupils).

To find new entries, the editorial team looks at the frequency that words occur. With the help of computer software, large quantities of different texts are scanned.

The selection is made from a list of about 15,000 words. Kunkel-Razum said there is a lot of “junk” to be sorted through. Names of footballers, for example, which appear in newspapers, are of no interest.


Professor of German linguistics, Kristian Berg of the University of Bonn, said the new edition will probably lead to renewed discussion about the state of the German language due to the increased use of English.

Berg said: “If there are complaints about (English words like) 'Influencers' and 'hype' in the dictionary, it is because they are systematically used in German. To blame the Duden for this is like blaming the weather forecast on the weather.”

Alexander Lasch, chairman of the Society for the History of German Languages, said the Duden today is “the best Duden we have ever had”.

The linguistics professor of the TU Dresden is relaxed about changes in language: “Language change is a sign that language is alive,” he said.