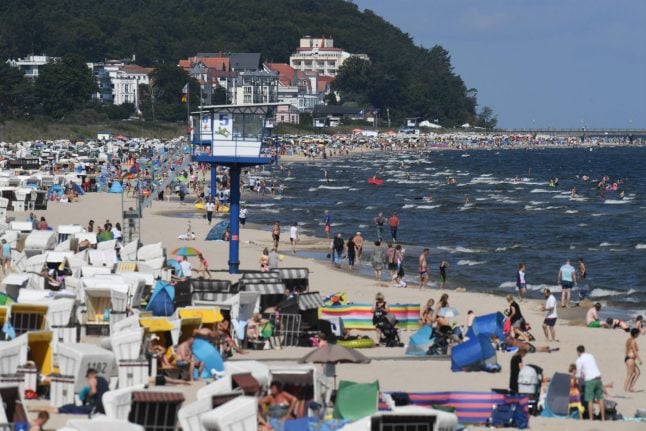 People cooling down at Stralsund at the Baltic Sea on Tuesday. Photo: DPA

After the changeable weather of July, the German Weather Service (DWD) says there's likely to be a longer heatwave in the coming days which could well become a historic weather event in parts of the country.

“According to our forecasts, the 30C mark will be exceeded in the Rhineland on Wednesday – and it will probably stay that way until August 13th,” DWD spokesman Andreas Friedrich told DPA.

In the Rhineland there could be nine hot days with temperatures above 30C in a row – without any cooling in between. It's even possible that the thermometer will rise to 35C.

According to the forecast, it will be similarly hot in the Rhine-Main region. For Frankfurt, the meteorologists expect six tropical weather days in a row from Saturday to the following Friday, with temperatures not dropping below 20C.

“This will be an extreme strain,” warned the DWD spokesman. He said that heat warnings were likely to occur in many places across Germany.

In Berlin for example, temperatures above 30C are forecast starting on Friday until the following Thursday.

The unusually long heat wave is also characterized by drought, with massive consequences for nature. “The extreme drought in the middle of Germany is threatening to worsen, the danger of forest fires is increasing even further.” Apart from a few thunder storms, no rain is expected.

The hottest day of the year so far in Germany was last Friday July 31st. In Rheinfelden in southern Baden the mercury reached 38.5C.

And on Saturday, temperatures in southern Germany climbed to well over 30C. The warmest area was Bad Mergentheim-Neunkirchen in the northeast of Baden-Wuerttemberg with 37.1C, according to DWD meteorologist Tobias Reinartz.

In general, temperatures in the south and in the middle of Germany were above 30C.

The temperatures brought the Baltic beaches in Mecklenburg-Western Pomerania a record-breaking number of visitors on Saturday. Even off the coast at some of the state's lakes, the amount of visitors was so large that access had to be limited.

Last year Germany saw its hottest ever temperature since records began – 42.6C – was recorded in Lingen, Lower Saxony, on July 25th during a European-wide heatwave.