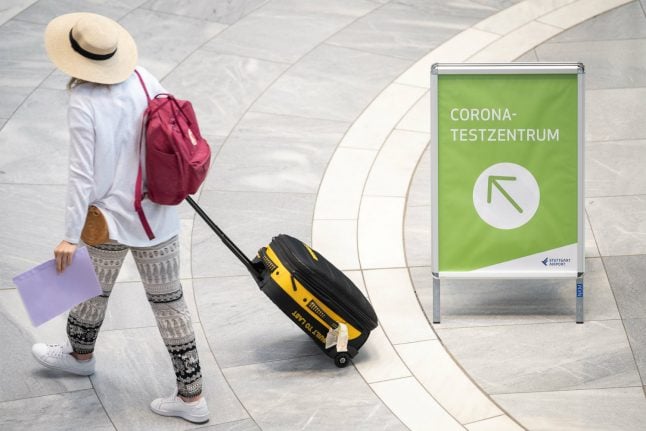 A sign for a coronavirus test centre at Stuttgart airport. Photo: DPA

Egypt, the Dominican Republic, the US or Turkey: if you return to Germany from one of these countries, you can expect a swab at the airport soon.

This will come into force over the course of this week, according to the government. Airports across Germany have been setting up test centres.

Travellers entering Germany from a risk area must be tested either up to 48 hours before their entry or up to 72 hours after arriving in Germany, for example directly at the airport.

Upon returning, any travellers who test positively must make their way to their destination directly. Until a negative test can be presented, they must self-isolate at home for up to 14 days (home quarantine). Implementation of the procedures lies with the 16 federal states.

What's a risk country and who's affected?

A list of risk areas is maintained by the Robert Koch Institute (RKI). In its latest version it ranges from Afghanistan and Egypt to the USA and the Central African Republic. The EU country Luxembourg is also on it. And since Friday also parts of Spain, namely the regions of Aragón, Catalonia and Navarre.

Thousands of people will be affected by the new rules: the number of returnees from the 130 coronavirus risk countries worldwide is currently around 16,000 passengers per week at Frankfurt Airport alone, according to the operator Fraport.

At the Berlin airports Tegel and Schönefeld, the number is around 2,000 a day each, according to the operator FBB.

According to the federal government, commuters from risk areas are usually exempt from the quarantine obligation according to their respective state law. They are therefore not required to present a test certificate. If they want, they are  eligible to be tested for free for a period of up to 72 hours following their arrival in Germany.

Lawyers believe Spahn's plan is legitimate. “A test is an encroachment on the right to physical integrity,” jurist Thorsten Kingreen from the University of Regensburg told Spiegel. “But the goal of infection control is legitimate and the intervention reasonable.”

He is not alone in this assessment. On the Germany broadcaster MDR, two experts expressed similar opinions: Alexander Thiele, expert in constitutional law at the University of Göttingen, and Stefan Huster, Professor of Public and Health Law in Bochum. A person being tested at Stuttgart airport on Monday. Photo: DPA

Incidentally, a mandatory test at the airport is already possible; it is regulated in Section 5 of the Protection Against Infection Act. The only new aspect of Spahn's plan is that tests are now also to be carried out at the airport.

What happens if someone refuses the test?

The authorities then have different options such as imposing a fine or ordering a quarantine, or both.

However, a coercive test with the help of police is also possible, said Jörg Radek, deputy chairman of the police union.

“In the end we have to enforce the law, and in the end also with coercion, said Radek In an interview with Redaktionsnetzwerk Deutschland. He stressed that compulsory tests required a “high degree of understanding from the population”.

Wilhelm Achelpöhler is a specialist lawyer for administrative law and a member of the committee on danger prevention law of the German Bar Association (DAV). He told Spiegel: “Immediate coercion would be conceivable if someone does not want to be tested.”

READ ALSO: What's it like travelling in Germany and crossing borders in Covid times?

To prevent a test by legal means is difficult in his eyes.

Theoretically, according to Achelpöhler, it is conceivable that a traveller might inform his or her lawyer shortly after landing.

The lawyer would then have to file an emergency petition with an administrative court, which could then inform the police officers. “In practice, this would probably be difficult to carry out,” said Achelpöhler. He also believes that a lawsuit would have little chance of success.

For more information on the tests visit the German government website.

Meanwhile, around 2.5 percent of holidaymakers have tested positive for coronavirus so far after returning to the German state of North Rhine-Westphalia, according to authorities.

NRW health minister Karl-Josef Laumann said there was a “relatively high” rate of people testing positive when they arrive from risk areas to airports in Germany's most populous state.

Laumann said around 40 to 50 percent of those returning made use of the free testing offer. According to the Corona-entry regulation, returnees from these areas have had to present a negative test no older than 48 hours or go into quarantine for 14 days since mid-July.

Laumann called these requirements “absolutely correct”. “Anyone who goes on holiday to a risk area must at least, I think, have enough solidarity with the people here to rule out infecting other people when he or she returns,” he said.

If travellers refuse a test, their details should be passed on to the local health authority, Laumann said.

In North Rhine-Westphalia, free test offers for travellers from at-risk countries began a week ago at the airports of Düsseldorf, Cologne/Bonn, Dortmund and Münster/Osnabrück. Last week, about 160 planes with about 15,000 passengers from areas currently designated as risk areas by the Robert Koch Institute – such as Turkey, Egypt, Morocco and Israel – landed at the four airports.

At Cologne/Bonn Airport alone, about 600 swabs for coronavirus tests per day are currently being taken, a spokeswoman for the city said. From 18th to 30th July, there were almost 5,000 tests. A total of 51 infected vacationers were identified. “Without the test, they would be out there right now,” said the spokeswoman.

Checks are difficult to enforce for those returning by car. However, Laumann appealed to the sense of responsibility and conscience of the people concerned to have themselves tested or to go into quarantine for 14 days if they might have become infected. 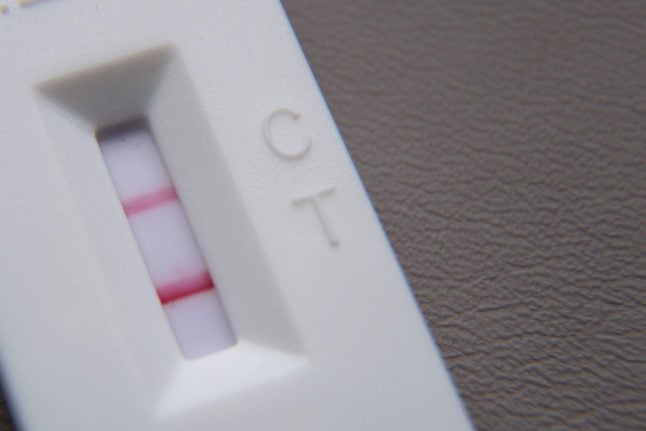