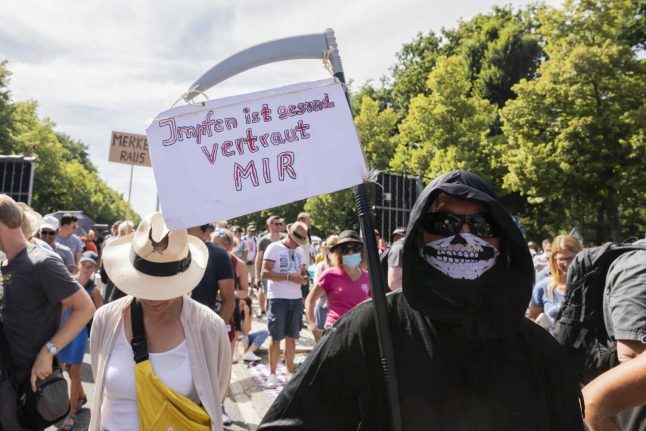 Police put turnout at around 20,000 — well below the 500,000 organisers had announced as they urged a “day of freedom” from months of virus curbs.

Despite Germany's comparatively low toll, authorities are concerned at a rise in infections over recent weeks and politicians took to social media to criticise the rally as irresponsible.

“We are the second wave,” shouted the crowd, a mixture of hard left and right and conspiracy theorists as they converged on the Brandenburg Gate, demanding “resistance” and dubbing the pandemic “the biggest conspiracy theory”.

Few protesters wore a mask or respected the 1.5-metre (five-foot) social distancing requirement, an AFP journalist reported, despite police repeatedly calling on them via megaphone to do so.

After several warnings, Berlin police ordered demonstrators to leave the area at the end of the afternoon.

Police tweeted they had launched legal proceedings against organisers for not respecting virus hygiene rules. A handful of people held a counter demonstration.

Dubbing themselves “grandmothers against the extreme right”, they hurled insults against “Nazi” protesters. The protest's “Day of Freedom” slogan echoes the title of a 1935 documentary by Nazi-era film-maker Leni Riefenstahl on a party conference by Hitler's National Socialist German Workers' Party.

Several politicians condemned the demonstration as Germany seeks to minimise transmission of a virus which had claimed just over 9,000 deaths as of Saturday — a far lower toll than its neighbours. Saskia Esken of the Social Democrats, a junior coalition partner in Angela Merkel's government, blasted the demonstrators as “Covidiots”.

In a tweet Esken railed: “No distancing, no mask. They are not only putting at risk our health but also our success against the pandemic as well as economic recovery, education and society. Irresponsible!”

Health Minister Jens Spahn agreed: “Yes, demonstrations should also be possible in times of coronavirus, but not like this. Distance, hygiene rules and masks serve to protect us all, so we treat each other with respect.”

Jan Redmann, regional head of Merkel's Christian Democrats in the eastern state of Brandenburg, also took aim at the marchers.

“A thousand new infections a day still and in Berlin there are protests against anti-virus measures? We can no longer allow ourselves these dangerous absurdities,” Redmann complained.

“Of course there are always different opinions regarding infringements of basic rights and restrictions of freedom — first, it's normal and, in my view, it's not the majority,” Seehofer told Bavarian daily Passauer Neue Presse.

Saturday saw 955 new infections — a level which the country had not seen since May 9, according to the Robert Koch health institute.

But marchers insist the risk of catching the virus is being much overblown. “It's pure scare tactics. I don't see any danger with the virus,” one marcher, Iris Bitzenmeier, told AFP.

“I don't know any other sick people. I knew many in March — skiers, holidaymakers. Something was really afoot in February — but now there are no longer any sick people,” she insisted.

Another demonstrator, Anna-Maria Wetzel, who had come to the capital after attending similar rallies in Baden-Wuerttemberg in the southwest, shared that view.

“People who don't inform themselves — unlike ourselves — remain ignorant and believe what the government tells them. They get caught up in the fear the government puts in our heads — and that fear weakens the immune system,” she said.