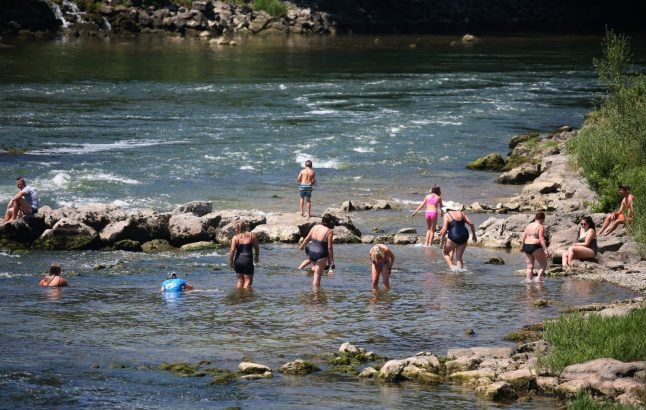 Summer in Bavaria - people gather in Landsberg am Lech on Friday. Photo: DPA

At the height of the coronavirus lockdown in Berlin, it was exciting to go to the bakery for a bread roll. Now we’re allowed to travel again for fun (at least in EU countries), there's a lot of new scenery to take in – but also new rules.

We are still adapting to life in the time of coronavirus and there are different restrictions wherever you go – when you cross borders or even in Germany’s 16 federal states.

Adding to that is the possibility of local lockdowns when cases rise. So the first thing to note when travelling is that you should do your research. The Foreign Office provides information on countries but it also advises you to look at the place you are going to so you can familiarise yourself with the rules.

You should also keep an eye on particular regions in case there are different local rules.

Germany issued a worldwide warning against tourist travel in March. But on June 15th the warning was lifted for EU countries and states (including the UK) and replaced with travel advice.

Like lots of others, I was eager to leave my Berlin neighbourhood and booked a week in southern Germany and Austria after the travel warning was lifted.

I was heading to Bavaria – the strictest of Germany's states when it comes to coronavirus rules – as well as neighbouring Austria. Plus we were going to pass through the Czech Republic on the way back.

My friend and I checked the government websites for these places (and of course read The Local) before setting off to find out any rules we should be aware of.

So what is it actually like to travel by train in Germany and cross borders? And is it risky?

My trip began in the Hauptbahnhof, or main station, of Berlin where I was armed with my tartan face mask (a must for a Scot) and hand sanitiser for the train to Salzburg in Austria.

On the high speed train, all adults were wearing face masks although they were being stuck to chins or under noses at times. And I have to admit that I did take my mask off to eat snacks. There were quite a lot of snacks…

But the carriages were not full so it allowed for distance with other people. We sat at a table for four and there was only a part of the journey where two others sat next to us (with masks).

I was quite surprised but Deutsche Bahn has said that it would try to avoid full trains during this time. And perhaps not as many people are travelling at the moment. When we crossed the border to Austria nothing changed: there were no border checks.

From July 27th, however, the Austrian government brought in some new entry regulations so anyone travelling should keep this in mind:

The regulation applies only to people who are residents in the listed countries or Austrian citizens. It is also a prerequisite that you have not been in any country other than Austria or those European countries in the past 10 days.

You do not need to show a test if you are only transiting through Austria without a stopover.

However, people arriving from a high-risk area have to produce a medical certificate proving a negative Covid-19 test, which can be no older than 72-hours.

Those unable to get tested before entering Austria, are required to get tested within 48 hours after arriving, and you have to self-quarantine until your test results arrive.

Meanwhile test stations are also being set up around the Germany-Austrian border at the crossings in Walserberg, Austria, as well as Pocking and Kiefersfelden in Bavaria.

I'd recommend taking proof that you're a resident in Germany when travelling. I took a photo of my Anmeldung (registration document) just in case because as a British person I don't have a residency permit.

In Salzburg, I noticed most people stuck to the rules of wearing masks on public transport and in shops. During tourist visits, such as to the Hohensalzburg Fortress, we were required to wear masks in indoor spaces like the museums or on the funicular.

Masks weren't worn all the time by restaurant workers, which has been the case from my experience in Germany.

It felt a bit different when we crossed the border into Bavaria. Here, the coronavirus restrictions are markedly tougher.

When we went to a beer garden at the beautiful Königssee near Berchtesgaden, the servers all wore face masks (and Lederhosen which we thought was a brilliant style) and we had to write down our contact details in case of an outbreak.

They also had to be worn on boat trips. There have been reports of Germans flooding resorts in the country as people turn to staycations while international travel is still limited.

However, we found places like the Königssee to not be overly busy, and there were always free seats in restaurants and cafes.

The only time I found it to be uncomfortably full was during the bus ride from Salzburg to Berchtesgaden. Social distancing flew out the window as people packed onto the bus. And as the bus was so hot with no ventilation, there were many noses poking out of face masks as people tried to breathe.

Next on our trip was the Austrian capital of Vienna. After a picturesque train ride through the mountains with fully masked-up people, we arrived in the main station.

Like in Salzburg, restaurant and bar workers did not always wear face masks but they were worn on public transport and shops as well as supermarkets.

At night lots of young people gathered in some parts of Vienna, for example along the banks of the river Danube and it appeared distancing was the last thing on their minds.

According to official rules masks have to be worn in Austria in these situations:

Additional safety regulations are being introduced regionally as needed. Currently, stricter rules for wearing a mask are in effect in Upper Austria and parts of Carinthia.

What does the future hold for travel?

On the way back from Vienna while crossing the border into Germany from the Czech Republic, police conducted a passport check on all passengers on our bus.

We all had to leave the bus and hand passports and ID to the officer who took them for a check and they were then given back to us.

Lots of people did not wear a mask on the bus journey – perhaps because it's not monitored as much as trains?

With so many opportunities to be near strangers while travelling or moving around cities, it's easy to see why authorities are concerned about the virus spreading through the opening of travel.

In future, as worries grow over a new wave of Covid-19, I think there will be even more chances to get tested, not just at airports.

Of course there are always risks but all you can do is follow the rules and wash your hands as much as possible. I had my own santiser but I would have preferred if there were some more opportunities to disinfect hands in shops and public places.

Yet it was such a joy to be out of Berlin, and even in another country. Going on a short holiday would have been nothing spectacular last year but in corona times it felt momentous.

Have you travelled in Germany or outside Germany during the pandemic? Let us know what it was like and we may include it in a future article. Email [email protected]