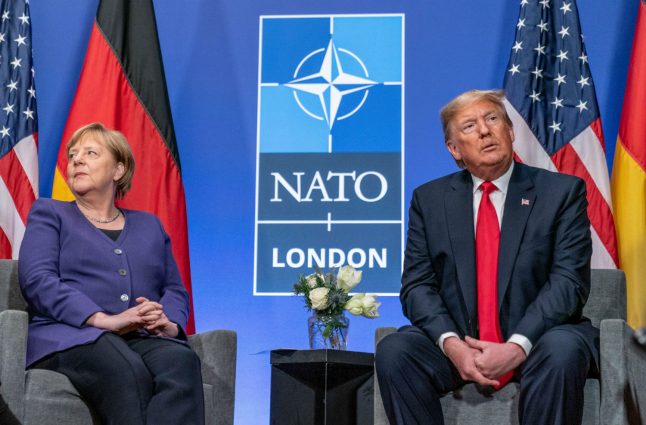 Merkel and Trump at a NATO summit in December 2019. Photo: DPA

Trump has clashed with plenty of US allies but he has appeared to have special enmity for Merkel, whose liberal, technocratic approach on issues from the coronavirus to immigration is at stark odds with the New York mogul's in-your-face populism.

After the Pentagon made the cuts official, Trump said he was acting because Germany had failed to meet the NATO goal of spending two percent of GDP on defense — although Italy and Belgium, which will take some of the US troops, spend even less.

READ ALSO: US to pull troops out of Germany

“The United States has been taken advantage of on trade and on military and on everything else for many years, and I'm here and I've been straightening it out.”

Trump, himself of German ancestry, has long accused NATO's second largest economy of unfairly enjoying US protection while promoting cars and other exports.

Trump first spoke of removing troops in June after Merkel, a scientist by training who has acted aggressively to stop COVID-19, rejected on health grounds Trump's plan to convene the Group of Seven leaders in Washington.

Trump had hoped to showcase a return to normal life ahead of November 3rd elections, in which he faces a tough challenge from Democrat Joe Biden.

Trump instead has mulled a wider summit that includes Russian President Vladimir Putin, who was kicked out over the takeover of Crimea. Not always photographed in bad spirits: Merkel and Trump at a G7 meeting in 2019. Photo: DPA

Robert Menendez, the top Democrat on the Senate Foreign Relations Committee, called the troop withdrawal “an affront to one of our closest allies” that would benefit Russia, which according to US intelligence intervened in the 2016 election to favor Trump.

“Champagne must be flowing freely this evening at the Kremlin,” Menendez said.

But the Trump administration has also targeted Germany over its own relationship with Russia, earlier this month opening the way for sanctions over their Nord Stream 2 gas project.

No patience for Trump

Trump's 2016 election shocked US allies but most tried to deal with him. Japanese, British and French leaders all flattered Trump with invitations, even if French President Emmanuel Macron was also vocal on disagreements over issues ranging from climate change to Iran.

Merkel from the start did little to hide her disdain for Trump.

Several months after Trump took office, Merkel made waves when she said that the United States under Trump along with Britain, which voted to leave the EU, were no longer reliable partners and that Europe should “take its fate into its own hands.”

Trump in turn shattered norms of polite behavior between allies. In 2018, he wrote on Twitter that Germans were “turning against their leadership” over the “big mistake” on welcoming millions of migrants.

The people of Germany are turning against their leadership as migration is rocking the already tenuous Berlin coalition. Crime in Germany is way up. Big mistake made all over Europe in allowing millions of people in who have so strongly and violently changed their culture!

Sudha David-Wilp, a senior transatlantic fellow at the German Marshall Fund of the United States, said that while gender could be a factor, Merkel had also been “joined at the hip” with Trump's predecessor Barack Obama toward the end of his presidency.

For Obama, “Germany was seen as the indispensable partner, especially in light of Brexit,” David-Wilp said.

“So I also think President Trump of course was probably wary of Angela Merkel and the other way around,” she added.

And in personality, “President Trump and Chancellor Merkel are diametrically opposite,” she said.

A recently published Gallup survey found that only 12 percent of Germans approved of how the United States exercises leadership.

Ivan Krastev, chairman of the Centre for Liberal Strategies, a research group based in Bulgaria, told a June conference at the Brookings Institution that he felt a shift in Germany which was “once the most pro-Atlantic country.”

But Obama, while personally popular, also had disagreements with Germany, which he had pressed to show more magnanimity toward the rest of Europe including debt-ravaged Greece.

“I do believe people are going to make a mistake if they believe that simply because Biden is back, Europe is back in its relations with the United States,” Krastev said.