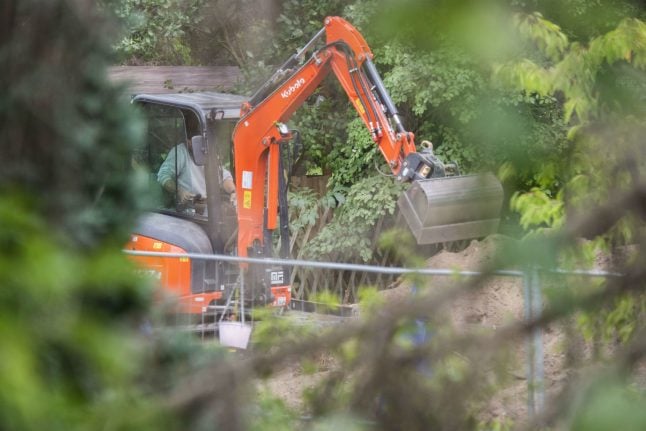 An excavator at the scene in Seelze in the Hanover region. Photo: DPA

Officers used sniffer dogs and an excavator as they dug up the site in the city of Hanover, with several police vehicles parked around a cordoned-off area.

The sky above the plot was declared a no-fly zone, according to the local Hannoversche Allgemeine newspaper.

Police revealed in June that they were investigating a 43-year-old German man in connection with the case, saying they believe he had killed Maddie.

The suspect, who was not named by police but identified by German media as Christian B., reportedly lived in Hanover from 2007.

Police began digging at the plot in the early hours of Tuesday.

They have given no details of how the search is connected to the case or what they hope to find.

Germany's Bild newspaper reported that police had unearthed the foundations of an old building, along with a cellar, which an unnamed neighbour said was part of a building that had stood there long before the suspect B. took over the plot.

A sniffer dog was used to search a cavernous space beneath a concrete slab on the site, according to the Hannoversche Allgemeine.

Brunswick prosecutors and police declined to comment on the reported cellar when contacted by AFP.

Madeleine went missing from her family's holiday apartment in the Portuguese holiday resort of Praia da Luz on May 3, 2007, a few days before her fourth birthday, as her parents dined with friends at a nearby tapas bar.

Despite a huge international manhunt, no trace of her has been found, nor has anyone been charged over her disappearance.

German prosecutors said in June they had “concrete evidence” that Madeleine was dead, despite British police continuing to treat her disappearance as a missing persons case.