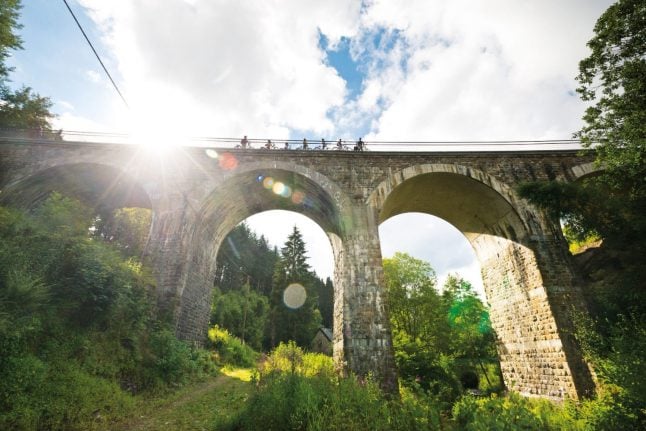 The path offers more than 125km of landscapes that stretch through Europe and encompasses three countries, as well as a distinctive history. The Local unpicks the story of the Vennbahn.

The Vennbahn wove through three countries, starting in the western German city of Aachen before making its way through Belgian territory and ending in Troisvierges, a small town in northern Luxembourg.

Along the way, the path winds itself in and out of Germany and Belgium, in territory which once wholly belonged to Germany before the borders were redefined.

Originally, the area in which the Vennbahn snaked through belonged to the Kingdom of Prussia. After this became part of the German Empire in 1871, construction of the railway started 11 years later to integrate the region more effectively into the newly unified German state.

Its second purpose was to carry coal from mines in Aachen to power the up-and-coming steel industry in Luxembourg. Thus, it became a crucial link for trade and further industrial development between the two regions.

Following Germany’s defeat in the First World War, the country was required to give away land to other European nations as outlined in the Treaty of Versailles. Many former German territories became part of Belgium, including those through which the Vannbahn passed.

What ensued was a disagreement between Germany and Belgium over who had control over the Vennbahn. Germany argued it was theirs, having been originally built by German people, while Belgium protested that they had a right to all infrastructure within the region now under their control.

Belgium even took the dispute one step further and claimed right over the whole track of the Vennbahn, even that of which still ran through German territory. A loss for Germany

Luckily for Belgium, who appealed to the international commission appointed by the Treaty of Versaille to smooth out such frontier-fixing disputes, the commission agreed with them, and the whole trackbed of the Vennbahn was awarded to Belgium.

It was especially unusual, where the railway tracks left Belgian territory and entered Germany’s. This meant that the original German territories became small German enclaves within Belgium, with five stations in each of the exclaves serving foreign citizens.

READ ALSO: A bike nation? How Germany plans to improve its cycling infrastructure

There were seven German enclaves in Belgium and one Belgian enclave in Germany. One German enclave was ceded entirely to Belgium and two merged together to become one, leaving five pieces of German land separated from mainland Germany by the Vennbahn’s railway track. The smallest of the enclaves, Ruckschlag, was only 1.6 hectares containing a single house with a garden.

Certain legal arrangements had to be made to accommodate the Vennbahn’s operations. Passengers on the line could use both German and Belgian currency to pay fares, and Germans venturing onto railway land for repair purposes were able to skip border control.

Belgians living on Belgian railway land and working on the railway were exempt from German law and taxes.

In 1940, Hitler re-annexed the territory and the Vennbahn became a German line. The train, however, gradually lost its importance in the decades to come, as it was unable to provide high-speed travel and was converted into a tourist attraction in the 1990s.

As this passenger service tourist attraction proved financially unviable, and the plan was hatched to convert the disused railway into a cycle route.

The trackbed was largely paved over to create a 125km long bicycling path that crosses through rivers, ravines and picturesque towns containing a unique history that calls into question the boundaries of borders.