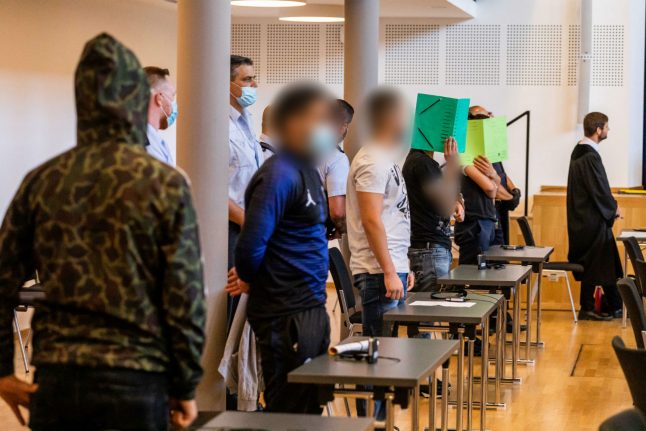 The defendants in court on Friday. Photo: DPA

The district court in Freiburg sentenced the main suspect to five and a half years, while seven others received between three and four years in jail.

Two others received suspended sentences and one man was acquitted.

The court heard how the victim, who was 18 at the time, had her drink spiked at a nightclub and was then led to some nearby bushes where she was gang-raped in an ordeal that lasted more than two hours.

READ ALSO: Why Freiburg has been rocked by protests after shocking crime

Eight of the accused are refugees from Syria, while the others come from Iraq, Afghanistan and Germany.

The case, one in a series of high-profile sexual crimes by immigrants in
Germany, triggered huge debate about the government's liberal refugee policies.

Supporters of the anti-Islam, far-right AfD party took to the streets of Freiburg in anti-foreigner protests at the time, triggering large counter-demonstrations.

The city of Freiburg had already been shaken by the 2016 rape and murder of a young German woman by an asylum seeker who claimed to be from Afghanistan.

The mass sexual assault of hundreds of women by mostly immigrant men during
New Year's Eve celebrations in Cologne in 2015 also stoked opposition against
Chancellor Angela Merkel's decision that year to open the country's borders to
those fleeing conflict.

Freiburg mayor Martin Horn told the Süddeutsche Zeitung that the gang rape had horrified the city, but he praised the way the majority of residents had resisted casting blanket suspicions on immigrants.

“It was right and important that Freiburg, as a cosmopolitan city, took a considered stance: the perpetrators have to be punished according to the rule of law, while at the same the vast majority distanced itself from populist instrumentalisations.”