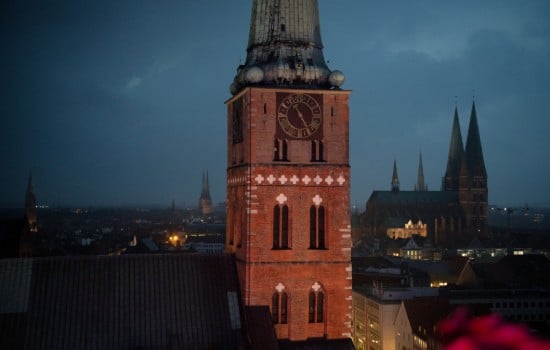 During its pomp in the 14th Century, Lübeck held sway over much of the Baltic region and beyond. It was the central city of a trading empire called the Hanseatic League.

While its importance has faded in the centuries since, its beauty remains undiminished.

Recognised as “a masterpiece” of medieval architecture by UNESCO since since the 1980s, it's fair to say Lübeck would stand head and shoulders above the rest of north Germany in a beauty contest.

But there is more to the town than pretty churches. One of the great German novels is set in a Lübecker merchant villa. What's more, the harbour is home to a world-renowned treat.

A once mighty trading town

Founded in the 13th century, Lübeck didn't wait around in its hunt for fame and fortune.

Trading in salt and herring, it quickly built its power inside a mercantile block called the Hanseatic League – a group of harbour cities that pooled resources to carve out beneficial trade agreements from Portugal to Russia.

By 1361, Lübeck had earned the title “Queen of the Hansa” – and it retained this position of power for a further two centuries.

“From the very beginning, Lübeck was the heart and brain of the Hansa; its heartbeat flowed through all of them, and its spirit shaped their thinking,” historian Karl Pagel wrote.

By the 16th century the party was coming to an end though. An ill-judged war with Denmark – including the construction of a huge battleship that was never used – ushered in the port's decline.

The Hanseatic League struggled on for three more centuries. But by the time modern Germany was founded in 1871 only Lübeck, Hamburg and Bremen remained as members.

The Hansa Museum, which opened its doors in 2015 and claims to be the first museum to tell the story of the trading empire, has tours in English. The seven spires of the Lübeck old town have been of the most iconic cityscapes of northern Europe since the middle ages. Wood prints, paintings, stamps and coins have all borrowed the church towers as backdrops over the centuries.

The red brick Gothic churches date back to the 13th century and tie together the skyline of a city surrounded by the banks of the rive Trave. Rising to a height of 125 metres, they can be seen for miles around.

Unfortunately around 20 percent of the city was destroyed by Allied bombing during the Second World War, including the town's main church, the Cathedral of Lübeck.

While much of that has now been rebuilt, it i not included in the three sights designated as World Heritage by UNESCO.

“Despite the damage it suffered during the Second World War, the basic structure of the Old City, consisting mainly of 15th and 16th century Patrician residences, public monuments, churches and salt storehouses, remains unaltered,” the UNESCO website states.

“Up to the present day, its layout is clearly recognisable as a harmonious, complete masterpiece and its uniquely uniform silhouette is visible from far.” Few German novels have been translated as often as Thomas Mann’s epic bildungsroman, the Buddenbrooks.

Based on his own upbringing in a once-great Lübeck merchant family, Mann brings 19th century Lübeck to life though the biographies of three siblings: melancholic family patriarch Thomas, neurotic brother Christian, and luckless sister Tony.

Mann doesn’t appear to have been too fond of Lübeck society. The characters are trapped in a luxurious, but coldly hierarchical society, where appearance is everything. Women are traded into unhappy marriages to secure the family fortune, and man are expected to fit into the straight jacket of an repressive merchant life.

Today one can still visit the Mann family home, a grand villa in the city centre that was the setting for the novel. Renovations at Buddenbrookhaus are underway this year. But the museum promises to give you a living experience of “the novel of the century” when it reopens in 2023. The almond-based sweet marzipan is said to have been invented in Persia some time in the 9th century. By the middle ages it had become a popular treat in Europe.

But it was only truly perfected when confectioners in Lübeck started to produce it in the early 19th century. The city used its wealthy and advantageous trading position to import enough almonds to ensure that the sweet was more almond than sugar.

Lübeck marzipan recipe is now a trademark. Producers in the city can’t put any more than 30 percent sugar in their sweets.

Niederegger, the most famous of all the Lübeck producers – founded in 1806 – has two cafes and a small museum in the heart of the all city.

READ ALSO: 10 things you might not know about Hamburg (even if you live there)